Zeb Hackett-Reicher reaches into a box of dried hemp and scoops up a handful.

The plant is rich and brown, and Hackett-Reicher, the president of the community’s new Halcyon Thruput hemp post-harvest processing plant, notes that it is something that can really benefit people.

“I’m a health and wellness nut,” says Hackett-Reicher, a Nashville resident who is originally from Minnesota and who began researching hemp for its nutritional value after learning about CBD.

An ingredient in cannabis that is obtained from the hemp plant, CBD, or cannabidiol, can be used to address different health issues, and Hackett-Reicher said he has his own success stories to share.

There’s the farmer who was cured of his skin cancer, the farmer’s daughter

who was able to get off her seizure medications, folks who have gotten relief from their anxiety and depression and diabetics and sufferers of high blood pressure who have been able to reduce the use of their medications.

Hackett-Reicher’s new hemp plant began taking shape in the Hopkinsville Industrial Park in May in the old Metokote location. It started processing this past week and sold its first material on Tuesday.

“Within another week, we should be fully operational,” said Hackett-Reicher, whose facility is fully-staffed now, including his own position as head of the facility and 26 employees who work for him.

The plant’s general laborers help unload the hemp, fill the super sacks, or plastic totes, at the end of the line and help load the trucks. Production managers manage the inventory and outbound material, and the plant also employs dryer operators who work with the machinery and equipment.

He noted that the Hopkinsville hemp facility began coming together last November because farmers realized there was a need for a mechanized process for the hemp they were growing.

There is no other dryer in southwestern Kentucky that has actually come to fruition. But there is an estimated 10,000 acres in the region that need drying, and Halcyon Thruput is committed to drying those 10,000 acres while also actively seeking additional toll processing clients, Hackett-Reicher said.

Additionally, the Hopkinsville facility is drying another 200 acres in northwestern Tennessee.

The new president also noted that his facility might expand in the future to secondary or tertiary locations in the state and is considering expansion to other states, including North Carolina and others.

“We have got the potential to expand in the state as well as outside the state,” he said.

Hackett-Reicher said his product has some of the highest CBD content on the market, a lot of it being “13% to 14% of CBD on a homogenized basis,” he said. By contrast, the premium material on the market is 10% while his company’s product consistently hits more than 12% and has had as much as 18%.

From his facility in the local industrial park, the finished hemp product goes out in the super sacks, or totes, and are transported by van trailers to processors, not only in Kentucky, but several other states.

Hackett-Reicher said he thinks the most important thing about what his company does is that it helps reduce harvest costs for farming while also helping streamline the extractors’ ability to source a standardized material efficiently.

“Our goal is for extractors to be able to purchase from a centralized location with a high quality material that’s consistent,” he said.

He said another advantage of his company’s offerings is an inventory management system that documents everything, providing full transparency for extractors who are putting that hemp into a product and who need to have a full chain of custody when they’re putting that product on a shelf.

With that documentation, they’re assured the product has no heavy metals in the soil, for example, no pesticides or herbicides, and does not exceed the 0.3 percent threshold for THC levels, he said.

Additionally, Hackett-Reicher said his company strives to make its hemp product as clean as possible, considering that they might be added to food ingredients at some point in the future.

The new president noted that establishing the Halcyon Thruput facility in the local community has been an undertaking, but Hackett-Reicher said it was something that he wanted to do.

Instead of being just another person in a large industry, he wanted to make a difference. 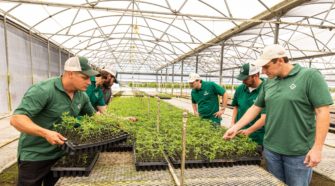