John Philpott’s new job is much like that of any other finance chief guiding a growing company to a public-market debut. He needs to get the books in order, bolster the finance team and develop relationships with bankers, all while keeping tabs on operations and emerging competitors.

But something makes the initial public offering process at Vertical Wellness a little more challenging: The fact that cannabidiol, or CBD, is the main product of the Agoura Hills, Calif., company, which Mr. Philpott joined as CFO this month.

Vertical Wellness works with farmers to grow hemp on about 2,500 acres of farmland in Kentucky, Tennessee and California. It processes the flowers, leaves and stems of the hemp plant and turns them into CBD oil, which serve as the basis for a variety of products such as pain creams, lotions, pain patches and shampoo.

CBD was legalized in the U.S. last year when it was included in the Agriculture Improvement Act of 2018, which enabled the growing of hemp and opened up the market for CBD-products such as creams, lotions and other nonconsumable items.

Although legalization has paved the way for a growing industry, there are still difficulties: Auditors are hard to find, competition is stiff and the stock prices of their trade rivals are volatile. And banking relationships with national or even international lenders are hard to come by.

Some banks and accounting firms have kept their distance from the sector because of a previous federal ban on growing hemp. The ban still exists for tetrahydrocannabinol or THC, an ingredient of the cannabis plant, which means companies focused on products containing THC rather than CBD can’t list on U.S. stock exchanges.

Some U.S. states permit the cultivation and consumption of THC, but companies operating in this space have resorted to listing in Canada, where the regulation of cannabis is looser and consumption of the product for both medicinal and recreational use is legal.

Many people struggle to differentiate between CBD and THC, which forces Mr. Philpott—who was introduced to hemp products about nine months ago, when his nephew recommended a cream to treat a shoulder inflammation—to provide additional explanations to allay concerns.

“When I meet with a bank, I first need to make sure they understand what kind of company we are,” he said. Some of the banks Mr. Philpott recently talked to still have to verify whether they can do business with Vertical Wellness, which works with a local bank in Kentucky but wants a national or international bank going forward.

“What they all agree on though is that this is an interesting space that they want to get into,” said Mr. Philpott, who has served in various financial positions and across several sectors, including life sciences, gold mining and staffing.

Mr. Philpott is now working on preparing the company’s financial reports for the U.S. Securities and Exchange Commission and recently hired a new auditor for that. Vertical Wellness has been in touch with the Big Four accounting firms Deloitte, Ernst & Young, KPMG and PricewaterhouseCoopers, but “their timetable was a bit slower than ours,” Mr. Philpott said.

“It is a very crowded industry, and there is nothing to suggest it will get less crowded any time soon,” said Kristoffer Inton, a basic materials analyst at Morningstar Inc. So far, there are only limited studies on the effectiveness of CBD, making it harder for companies to distinguish themselves from other competitors.

Cannabis-focused companies such as

are also looking into the CBD-market, said Mr. Kessner. Canopy Growth is part-owned by

and received around $4 billion in investment from the drinks maker. It is currently building a hemp industrial park in upstate New York for cannabinoid extraction and manufacturing.

“The key Canadian cannabis companies all see tremendous potential in the U.S. hemp-based CBD market, and are all actively investing in the infrastructure to capture that opportunity,” Mr. Kessner said.

That is one reason why Vertical Wellness hopes to go public soon. “There is a race to scale,” Mr. Philpott said.

Vertical Wellness plans to list on the New York Stock Exchange or Nasdaq, the company’s chief executive, Smoke Wallin, said in an interview. “It is a lot easier to raise money publicly,” Mr. Wallin said, adding that institutional investors are increasingly looking to invest in hemp companies but shy away if those businesses are closely held.

Vertical Wellness is owned by a number of shareholders, including Mr. Wallin and Mr. Philpott. The business spun out from Vertical Cos. earlier this year. Its former parent raised about raised about $65 million from investors, of which $25 million has been plowed into the business, Mr. Wallin said.

As a public company, Vertical Wellness could be exposed to stock-market volatility as well as more investor scrutiny. Stocks for cannabis-companies trading on Canadian exchanges, such as

and Cannabis One Holdings Co. have fluctuated in recent months, as investors put additional scrutiny on companies’ financial results.

“It is a lot easier to run your business if you are not publicly traded,” said Mr. Philpott, but added that for Vertical Wellness, a listing would still be advantageous. The company forecasts annual revenue of around $20 million this year, which is expected to rise to several hundred million dollars in 2020, according to Vertical Wellness forecasts.

Write to Nina Trentmann at Nina.Trentmann@wsj.com 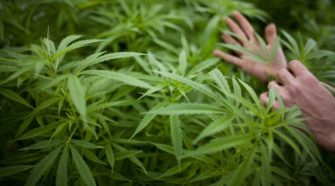