As Canada rings in its newfound legalized marijuana, Cleveland has just done something similar. While cannabis itself is not legal in Tennessee, hemp is.

What is hemp? No one can tell you better than the workers at the new Cleveland business Vapenotiq Hemp and CBD Dispensary, your one-stop shop for all things hemp and cannabidiol.

Opening its doors on Oct. 3, the business has not even been open for a month yet, and already there are Cleveland residents kicking down its doors to get its products. This is something owner Cody Warren found ironic, as Vapenotiq was also robbed approximately one week ago and lost upwards of $25,000 worth of merchandise.

“In four years of business, we’ve never had a break-in until we opened our business here,” Warren said. “The guy kicked our door in and took what he wanted.”

Despite the theft, Warren reports a surge in support for their business and sales, with locals telling them to not let the theft deter or discourage their business ventures. Some of this outpouring of customers have included police officers and even local pastors.

“We were so nervous about moving to Cleveland, because we were afraid people wouldn’t understand what we were selling and be vehemently against it. Instead, we’ve had so much support and have had nothing but good things said from the community,” he added.

Hemp is a sister plant to marijuana; however, unlike marijuana which causes psychoactive effects, hemp doesn’t have the THC levels that marijuana does, and as a result, only lessens pain, lowers anxiety and battles inflammation. It’s also legal.

Warren and his wife, Audrey, started a vape business in 2014 in Athens and expanded into Etowah. A year later in 2015, they began selling CBD products, and Warren believes they may have been the first company to sell CBD products in the state of Tennessee.

“My daughter had cancer, and when you’re dealing with stuff like that, you’ll use anything that’ll help. And that’s what a lot of our customers come in for. They’ve either tried everything they could, or the doctor’s got them on some highly addictive opioid for their pain,” he said.

In 2015, some of the only CBD products available were in vape form, as the world was in the middle of what Warren calls the “hemp boom,” and were just discovering the plant’s properties. After looking at countless CBD-based products, the company went with a brand called “CBD Drip” from California.

Seeing quite a bit of success from the CBD products, Vapenotiq opened another location in Lenoir City in November 2017. Audrey said the hemp industry is still a relatively new business, and vendors have only recently been able to sell hemp in its bud form.

“When we brought in the bud form, the biggest mistake people make is thinking it’s marijuana, which looks exactly like hemp buds,” Warren said.

Hemp has a variety of uses. Most people will smoke it or apply it as a salve to ease pain, and different strains of hemp work for various ailments such as anxiety. CBD oil is the same way. Hemp can also be made into edibles such as brownies, butter or other recipes. It can be woven into fabrics such as shirts or hats and prior to its legalization, hemp was commonly seen as the material used in rolling papers for cigarettes. Hemp fiber can be extracted from the stem of the cannabis plant and used to make rope, stout fabrics, fiberboard and paper.

Several Vapenotiq customer testimonies have reported the miraculous healing capabilities of hemp compared to the lackluster and overall addictive qualities of medical opioids.

In addition to hemp and CBD oil, Vapenotiq is also one of the few proprietors of kratom in the state, which is a powdered food additive that helps with pain and inflammation.

“You could take the most hardcore opiate-addicted person on the street, take their drugs away and when they start going into withdrawals, give them kratom and those withdrawals will immediately stop. It’s the wildest thing. It actually triggers the opiate receptors in the brain like a hydrocodone would, but it’s all natural and harmless,” Warren said.

When purchasing hemp, Audrey stresses the importance of knowing where your product comes from. While she doesn’t expect all customers to come to Vapenotiq, she said that whoever does will get the best product knowledge of any store in the region. For those who don’t smoke at all, Warren doesn’t advise anyone to start, but said the beauty of the industry is that the pain-relieving benefits can be conveyed through creams, tinctures, edibles and even pills.

Since the break-in, Vapenotiq has installed an ADT home security system as well as video surveillance systems and a metal frame for its door.

For those interested in seeing all of the options Vapenotiq has, it can be contacted at 423-790-5812, through its Facebook titled “Vapenotiq Hemp and CBD Dispensary Cleveland” or through its Instagram. Warren added how they also always offer military, law enforcement, student and local government discounts off their products.

Previous B.C. made 21,000 cannabis sales in first week of legalization

Next No Labels: Cannabis Branding Is No-Go In Canada 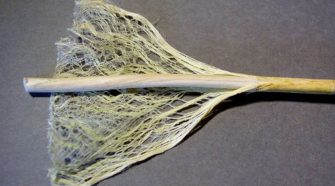