BOISE — Legislation that would have allowed for the production and processing of industrial hemp in Idaho died in the House State Affairs Committee on Wednesday.

Following two hours of public testimony over two days, the committee killed the bill on an 8-7 vote. As a result, Idaho will remain one of two states without a legal hemp industry.

Several farmers and producers spoke in support of the measure, which was sponsored by Rep. Caroline Troy, R-Genesee, and Sen. Abby Lee, R-Fruitland.

Corey Marshall, the strategy and development manager for Mill 95, a hops processing firm, said the inability to grow and process industrial hemp puts Idaho’s hops industry at a competitive disadvantage.

Hops and hemp are genetically related, he said. The two crops are processed and dried the same way, but hemp has a later harvest window. That means the drying equipment could be utilized at a higher capacity, and the operating costs could be spread over a larger volume of product.

“It would allow us to be more competitive,” Marshall said. “Idaho is the second-largest hops-growing state, and one of the largest hops regions in the world. But we’re at a competitive disadvantage with other states right now, because they’re allowed to process hemp along with hops.”

The prohibition on hemp dates back to the 1930s, when it was banned along with marijuana.

Although hemp looks like marijuana, by definition it contains less than 0.3 percent THC, which is the psychoactive component of the plant that gives people a high. Most modern strains of marijuana, by comparison, have at least 20 percent THC.

The Troy/Lee bill directed the Idaho Department of Agriculture to develop a state plan outlining how hemp would be regulated. The intent was to allow for the production and processing of the plant, while putting permit requirements and other restrictions in place to keep hemp from serving as a screen for illegal marijuana grow operations.

“We put a lot of sideboards on this bill,” Troy said. “I have no interest in legalizing marijuana, but it’s also really important (for Idaho farmers) to have the opportunity to grow this crop.”

Scott Bandy with the Ada County Prosecutor’s Office spoke in support of the bill, saying it included testing requirements and other provisions “that allow law enforcement to make a distinction between hemp and marijuana.”

Nevertheless, several speakers worried that legalizing hemp would be a first step toward legalizing marijuana.

“I’m a retired law enforcement officer from California,” said Roger Kenyon. “I saw first-hand what happens to a state that opens the door to the marijuana-hemp culture.”

“You tell me how that equals a ‘marijuana culture,’ ” she said. “Hemp has found a role in products offered to consumers across the United States.”

Other opponents felt the bill entailed too much regulation or was unworkable for other reasons.

Hari Heath, a Republican candidate for the Idaho House seat currently held by Troy’s 5th Legislative District colleague, Rep. Bill Goesling, said a hemp industry couldn’t develop in Idaho under this bill because THC levels are concentrated during the processing stage and exceed the 0.3 percent limit.

While he supports the legalization of hemp, Heath noted that the Idaho Republican Party opposes federal involvement in agricultural production. The state plan mandated by this bill, however, would have to be approved by the federal government.

“The federal government shouldn’t be engaged in things it isn’t constitutionally authorized to be in,” he said. “I would encourage this committee to vote no and give more attention to how we can move forward.

“Hemp is a great product, but this is a bad bill.”

Troy said she tried to craft a bill that worked for Idaho farmers, while also allowing Idaho law enforcement to enforce the state prohibition on marijuana.

“We’re not looking for a touchdown or a field goal,” she said. “We’re not throwing a Hail Mary. We just want Idaho farmers to be able to get on the field. Forty-eight states have regulated hemp and they’ve done it with the 0.3 percent. This is an Idaho bill that works for Idaho law enforcement and Idaho agriculture.”

The committee was pressed for time and barely debated the bill before killing it.

Previous 'Hemp can sequester 15t of carbon per hectare' - Agriland 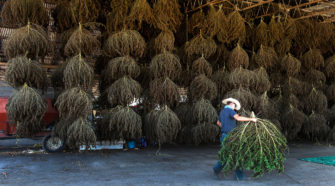