Industrial hemp is again temporarily banned in Humboldt County, as the Board of Supervisors voted unanimously today to revive a moratorium.

A new 45-day temporary ban will prevent hemp cultivators from selling the plant and competing against cannabis growers on the market.

Hemp, a variant of the cannabis plant, is federally legal and unregulated, while cannabis itself is heavily regulated at the state and county levels. The distinction could create a major price gap because both plants can be used to derive the cannabinoid CBD.

“If we just changed to allow hemp in the cannabis ordinance, there would still be a price reduction because it’s not regulated at the state level,” said Planning and Building director John Ford.

Despite hearing from members of the public who urged the county not to discriminate against hemp in favor of cannabis, the supervisors reasoned that hemp can’t go on being totally free of regulations.

Third District Supervisor Mike Wilson noted how environmental issues posed by cannabis cultivation have spurred on regulations. Hemp, he indicated, is in the same boat.

“They’re the same concerns,” he said. “We litigated a lot of those concerns through the (cannabis) ordinances we already had… There’s a lot of environmental issues that are not dealt with in the state provisions for CBD.”

The board’s decision comes just days after another temporary ban on hemp expired, which allowed potential hemp growers to submit applications to cultivate the plant to the county agricultural commissioner’s office.

On Monday, the county accepted 40 applications for industrial hemp cultivation, each about $900 in fees for the aspiring legal farmer.

With the latest ban in place, the county will return those applications and the fee money until officials finalize hemp regulations, Agricultural Commissioner Jeff Dolf said.

Fifth District Supervisor Steve Madrone, who voted for the temporary ban today, said at last week’s meeting that he didn’t support a moratorium. At today’s meeting, he clarified his position, saying he supports ordinances for both cannabis and hemp but believes the county has overregulated pot.

“With cannabis, we regulate it more than our food crops,” he said. “It’s just bizarre … . Things got regulated much more than I wish it had.”

As with past public hearings over hemp, members of the public who spoke today were split on whether they support the temporary ban.

One mother said she treats her daughter’s epilepsy with hemp-derived CBD. Taking away legal sales, she argued, would force them to use imported products from out-of-state at higher costs and potentially poor quality.

Her daughter spoke soon afterward, saying she needs low-cost hemp-CBD to be able to go to school, emphasizing that a moratorium would make it impossible for her to seek the treatment she needs.

Jasmine Finley, another speaker, said she has seen the community suffer in the wake of the county’s strict cannabis ordinance. Pot business has left the state, she said, indicating that hemp could go the same route.

“Our community needs something,” she said. “Marijuana is not going to keep our economy afloat. I was born and raised here, and I’m seeing it all fall apart. If there’s 40 farmers who put in applications on the one day you could have applications in, clearly there’s farmers in Humboldt County who want a chance.”

Others, including some in official positions, echoed concerns about an unregulated hemp industry in Humboldt County.

“While it’s a positive development that we just nationally legalized hemp, the reality is that the agricultural methods for growing hemp are wildly varied,” said Friends of the Eel River executive director Stephanie Tidwell.

“What we see in the way CBD is farmed — its environmental impacts are virtually identical to what we see with THC cannabis,” she said. “So, therefore, from an ecological perspective, we support a moratorium with an eye toward creating a regulatory process.”

Scott Bauer of the state Department of Fish and Wildlife had the same support for the temporary ban, advising a “cautious approach” in dealing with the hemp crop.

Tom Wheeler, executive director of the Environmental Protection Information Center, argued for hemp regulations, saying they should be adopted quickly in a “fairly open” process.

The public voiced its thoughts for some time. Ultimately, the supervisors sided with another temporary ban.

“To me, it makes sense that we take the time,” said 4th District Supervisor Virginia Bass. “And I know that will be inconvenient for some people who are really excited to get moving. But at the same time, it’s a good idea to go forward with the moratorium so we can actually take a closer look at the concerns mentioned today.”

With a 45-day ban in place, the supervisors plan to return to the topic in the next 30 days and gauge the county’s progress in developing regulations for industrial hemp. 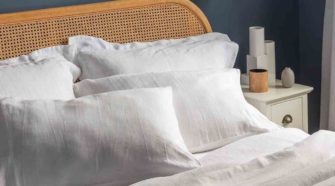 Aiming for a sustainable lifestyle? Hemp bedding is what you should be sleeping in – Real Homes