On Wednesday, Neil Rudy, a west Daviess County farmer, was still waiting to hear from the Kentucky Department of Agriculture about when he could cut his remaining hemp that had started to lean in his field.

Rudy said he’s been farming most of his life and this was the first time an email would dictate his harvest date.

“We have regulations on the farm but nothing like this here,” Rudy said. “…It’s usually Mother Nature that’s in charge of when we can harvest.”

But this year, he added hemp to his crop portfolio, converting 5 acres of land behind his home. He’s growing it for the cannabidiol or better known as CBD oil that is extracted and sold for its touted medicinal uses.

Rudy is among Kentucky’s 1,000 licensed hemp farmers who grew the state’s newest crop this year.

He staggered his planting starting in June with the cherry variety and ending in July with the box variety.

Although an experienced farmer, Rudy said it was still trial and error as he discovered the various challenges to raising hemp.

“We weren’t allowed to spray any chemicals (for weeds) or insecticides to control our insects,” Rudy said. “We tried using generic stuff like putting molasses on it; they say insects can’t digest that.”

Rudy said raising hemp consumed more time than he expected with the planting, testing, hoeing and constant watering. And to harvest it, tobacco knives or large pruning shears are used to cut the stalks.

“It’s really a labor-intensive crop,” said Rudy, who compared it to growing and raising tobacco. “… We had to pull samples off of it every week to make sure our oil content was getting higher.”

Monitoring his hemp’s tetrahydrocannabinol (THC) level through its growing process was another aspect Rudy wasn’t used to. State law limits a hemp plant’s THC level to 0.3%. Anything higher is considered too hot and would have to be destroyed.

“On top of all that, we had to worry about theft,” said Rudy who had 20 plants stolen. “It does smell, feel and look like marijuana.”

But what he harvested more than three weeks ago is hanging inside former tobacco barns and a converted open-air shed for the drying-out process that takes up to six weeks.

Black plastic is placed on the ground to capture any of the leaves that drop from the plant as it dries. What’s left will be stripped by hand and combined with what fell on the ground.

“We have to wait for it to get down to about 12% moisture before the company will take it,” he said. “… It’s going to be time-consuming to strip because all we should have left are the stems. If there are too many stems, they’ll dock you.”

Once the leaves are stripped and collected, Rudy’s harvest will be taken to his contracted processor — Bluegrass BioExtracts on Wing Avenue — and turned into CBD oil.

“What’s going to determine if I grow it again is whether or not I get paid,” Rudy said. “…There’s not as much demand for this oil as they said it was going to be. And if we don’t get paid until June or July, that’s not good to wait that long to pay a farmer, especially when he has all the money tied up in it.” 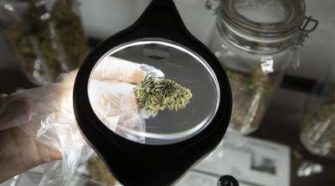