STANARDSVILLE — With the rising popularity of cannabidiol (CBD) oil and hemp-related products, its agricultural production is a growing revolution across the country.

Industry estimates in 2018 reported U.S. hemp product sales at nearly $700 million annually, and according to a study by cannabis industry analysts the Brightfield Group, the hemp-CBD market could reach $22 billion by 2022.

As of Tuesday, the Virginia Department of Agriculture and Consumer Services had issued 955 grower registrations, 191 processor registrations and 55 dealer registrations. Hemp is projected to cover 10,100 acres, or 10 million square feet, in Virginia, according to VDACS.

Until recently, only researchers at Virginia universities could grow hemp for making CBD, but with changes in state laws, a Stanardsville farm is among those producing the naturally occurring chemical that some say has mental and physical health benefits.

While other states have allowed farmers to grow hemp and manufacture CBD products for years, Virginia farmers were barred from doing so until House Bill 1839 passed in February. Gov. Ralph Northam signed the bill into law on March 21 and it took effect immediately due to an emergency clause.

The amendment passed conforms Virginia law to match the federal 2018 Farm Bill. It further defines that hemp cannot contain more than 0.3% tetrahydrocannabinol (THC), which is associated with getting “high” or altering the body, mind and emotional state. Virginia farmers can now grow hemp to produce CBD and other products.

The March amendments to the Virginia Industrial Hemp Law eliminated the requirement that hemp be grown solely for research purchases, and permit the commercial production of industrial hemp. Those who wish to legally possess hemp plants in Virginia, however, must be registered annually as industrial hemp growers, dealers and/or processors.

“If you think about that, if all the tomato farmers in Virginia can only sell tomatoes to another tomato farmer, what would they be doing? So, maybe you could sell it to the ketchup guy because he has a permit to process tomatoes. But you couldn’t sell a tomato to an individual,” he said.

“So things are still kind of confusing, and part of it is that the state is trying to deal with the federal laws that are very different. Being not sure what to do to not get in trouble is definitely an issue. Some people are just going full steam ahead. The legislature just made rules and restrictions and the permitting process so that they could get hemp happening — part of it is just the slowness of the government, and part of it is not really knowing what to do because it hadn’t really been done before.”

At first glance, the greenhouse and fields at Planet Earth Diversified may look like pothead paradise filled with plants that look and smell like marijuana. However, the misleading crop is actually hemp, a relative of cannabis that can be made into rope, soap or the increasingly popular CBD oil.

Clark, who’s been growing hemp for three years, said there are a number of different ways to produce the oil.

“It can be done with a solvent extraction or a non-solvent extraction, sometimes with CO2 or sometimes ethanol,” he said. “A lot of people are so uncertain about what they’re buying in those bottles because it comes from out of the country or it’s so old that it’s already degraded. There’s really no control, which unfortunately will probably mean the [U.S. Food and Drug Administration] will step in eventually and make it too hard for anybody to do it. We have this kind of nice period where a farmer might actually be able to make a healthy product.”

In addition to the oils, Clark makes teas and soda and also has been working on a hemp pesto.

“There’s an edible paste of just the raw leaves, just like you would do an herb pesto. We blend that with some herbs,” he said. “That’s the nicest because you’re getting fresh, green and unprocessed material.”

A typical day on the hemp farm is 5 a.m. to midnight, Clark said with a laugh, but emphasizing that there is a lot more to it than most people realize.

“We typically are examining the plants for their condition, making sure all the systems are working. Once we get a little bit further along on this, we’ll be cutting these and trimming materials and drawing it, so we’ll have to hang it to dry it. Then we’ll have to go through and try and remove the stems and prepare it for whatever processing that we’re going to do. What we’re doing uniquely is we take some of the leaves that are what they call the ‘fan’ leaf that’s not usually used as much. That’s what we’re trying to make the food products out of because you can actually eat it and get some of that same effect,” Clark said.

Clark, who’s been a Greene County resident since the 1970s, says he sees Planet Earth Diversified developing more hemp-infused food products in the future so that people can get the benefit from eating something that gives them the same relief and calming sensation. In addition to growing hemp, Planet Earth Diversified also produces micro and nano greens and sodas.

“We’ll pursue what we can do, but food products is really mainly what we’re doing, so adding hemp to that is what we want to do,” Clark said. Clark also sees supplying more clones and consultation services to current and prospective hemp farmers in the future.

“We’re pretty good at growing the material, so we’ll probably supply people with viable clones and consulting on how to do it,” he said. “We can provide that service, but probably the most valuable thing that I do for people is that consulting service because we can save people so much money.”

While Clark has been farming most of his life, the choice to get started in hemp came from the benefits of CBD oil.

“We really started with the ginger and turmeric and we had young children that were getting pain relief from just drinking the turmeric and ginger drinks and they had a real benefit with the CBD, too,” he said. “What we’re really trying to do is healthy food. [Growing] hemp became a natural thing to do.” 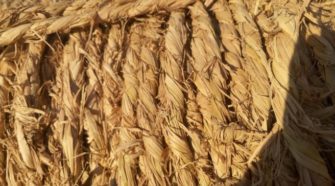