Surrounded by state lawmakers, industrial hemp stakeholders and reporters, he snipped off the top of the stem and placed it in a brown paper bag.

“For us to continue to find and expand and innovate those markets as Minnesota’s always done, this is the place for us to highlight,” Walz said.

The first-term governor on Aug. 30 visited Minnesota Hemp Farms, the first to grow industrial hemp under the state’s pilot program back in 2016 in an effort to raise awareness about the industry and learn more about how the state can help it grow.

His visit comes just more than a week after South Dakota authorities released details about a July arrest of a Colorado driver carrying hemp through the state to Minnesota. The man was arrested for possession of marijuana as well as other charges, despite federal guidelines that allow people to transport hemp to states or tribal territory where industrial hemp is legal.

South Dakota is one of just a few states that hasn’t legalized industrial hemp. And while Walz said the timing was a coincidence, lawmakers and hemp industry stakeholders at the farm said they would take the chance to contrast Minnesota’s hemp policies with the state’s neighbor to the west.

“Farming is difficult right now, as most of you know, and there’s not a lot of control that we in the Legislature have to … help the farmers maintain profitability. But whenever we can knock down hurdles like we can with new markets — with hemp — I think we owe it to them to do that,” Rep. Tony Jurgens, R-Cottage Grove, said. “South Dakota, they’re lagging behind in this market and I think that we can really prove that we’re a leader in Minnesota.”

The state should take it a step further and become the leader in hemp production and processing, Jurgens and state Sen. Karla Bigham, D-Cottage Grove, said.

“I want Minnesota to be the No. 1 producer of hemp and exporter of hemp. It is a good, durable product that is sustainable,” Bigham said. “We should be doing what we can to lead in this nation and lead in this industry.”

Growing industrial hemp became legal under state pilot programs as part of the 2014 Farm Bill and corresponding state legislation the next year. And in 2018, the federal farm bill legalized growing hemp for commercial purposes, blowing up the demand for the new crop.

The number of licensed hemp growers in the state grew from 43 in 2018 to 310 in July of this year. And that demand continues to grow, according to the Minnesota Department of Agriculture.

The Legislature earlier this year passed a law allowing Minnesota medicinal marijuana companies to buy Minnesota hemp to be used for CBD and other products.

John Strohfus, a farmer-rancher and owner of Minnesota Hemp Farms, said he was glad to see lawmakers help expand pathways to processors and markets for his budding crop. And he urged them to authorize additional funding to law enforcement so they could have better tests to detect the concentration of THC, the component in hemp and marijuana that can cause psychological effects.

Next Yes, You Can Smoke Hemp. And Yes, It's Gaining Popularity - New England Public Radio 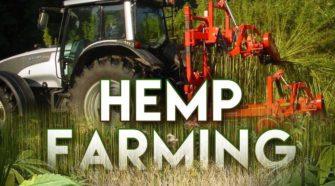