In 2017, the first year it was legal to grow industrial hemp in Nevada, Harris Farms began cultivating it outdoors on a 10-acre plot north of Pahrump. By 2018, a federal reclassification removed the hemp plant from being labeled as a controlled substance.

For the Harris family—second- and third-generation Pahrump farmers—the switch from growing alfalfa to growing hemp seems to have worked out.

“Here in Pahrump, most of it has been alfalfa for the past 15 years,” Dan Harris said. “With alfalfa, if you miss a beat, you’re not going to have a very good year. Hemp comes along and we didn’t know anything about it, but here we are in year three and we couldn’t be happier.”

The farm cultivates the crop for cannabidiol (CBD), an ingredient often used to treat conditions such as anxiety, pain and movement disorders. But unlike the closely related marijuana plant, hemp contains CBD and only trace amounts of THC (weed’s psychoactive agent). CBD offers health benefits without the “high.” Much of the product grown at Harris Farms is shipped to Las Vegas-based NectarTek, where CBD isolate and distillate are extracted from the plant.

By the end of this harvest season—around Thanksgiving—the Harris Farms operation will have produced about 65 acres worth hemp plants. From planting to harvest, hemp is about a 120-day crop, Harris said.

“The hemp plant itself is a hearty plant,” Harris said. “We’ve grown a few different strains and all of them do fairly well here in the desert. Hemp has caught the eye of a lot of small farmers here. I’d say there are 25 or so farmers in Pahrump; we’re talking small operations with three or four acres at a time growing it now.”

“It’s a little cottage industry where a small-time farmer can do pretty well here for the next several years,” Harris said. “I’m excited about what hemp can do for the small farmer. With this plant, we’re learning something new every day.”

Growing hemp can be challenging at times and requires some trial and error, said Michael Whalen of the Nevada Hemp Association.

He said it’s anything but a get-rich-quick scheme.

“As far as Nevada goes, there were a lot of people who were wondering if hemp would thrive in the conditions that we have here,” Whalen said. “It’s done incredibly well and has made a lot of money for these farmers and the companies that are getting into it. That said, it’s a lot of work and there’s some failure that we’ve seen as well.”

In Southern Nevada, Harris said, a farmer can typically grow a hemp crop using about 2 acre-feet of water (about 650,000 gallons) per year.

That’s less than half of what it would take to grow alfalfa, Harris said.

“Obviously, water usage is a big deal in Nevada and throughout the West,” Harris said. “I think the stigma associated with [the hemp plant] is becoming less and less. It’s just a matter of time until growing hemp is like growing alfalfa or corn or anything else.”

Whalen said the sky is the limit for how big hemp farming can get.

“It’s the return of the family farm and the American dream, I believe,” Whalen said. “That’s because a farmer can actually make some money off a little bit of land.”

This story originally appeared in the Las Vegas Weekly. 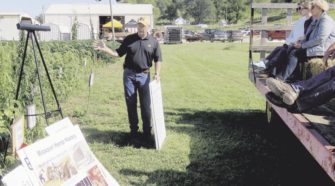