ATLANTA — Georgia farmers are poised to cash in on the cannabis craze.

By the end of the year, state officials plan to submit proposed rules to the federal government for growing hemp, the Atlanta Journal-Constitution reported.

That means Georgia farmers could begin legally raising the crop as early as this spring.

Hemp is used to make CBD, the suddenly popular compound extracted from the cannabis plant. Marketers say it can treat a range of ailments without getting users high.

CBD oil in Georgia has so far come from other states.

Under Georgia’s proposed hemp rules, farmers would only be able to sell hemp to state-licensed processing companies.

Hemp crops grown by licensed farmers would also face inspection. If they exceed a limit for THC — the compound that gives marijuana users a high — they will be destroyed, according to the Journal-Constitution.

Federal rules for growing hemp were recently published. The state’s proposal must comply with those rules.

Once the state receives that approval, Georgia will move fast to propose a final set of rules that could be in place soon after a 30-day public comment period, McPeake told the Journal-Constitution. 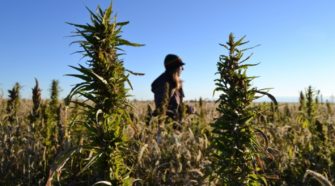