ELLETT VALLEY — When Jabari Byrd first learned that industrial hemp could be grown legally in Virginia, he said he became something akin to a prophet crying out in the wilderness.

“I was advocating for hemp all the time, just always talking to folks about hemp,” he said. “But nobody wanted to hear what I had to say.”

That was 2016 and Byrd was a struggling biochemistry undergraduate at Virginia Tech just trying to get through his bachelor’s degree. But then he heard that Tech Professor John Fike would be starting up hemp research, and Byrd said he wanted in. It would mean getting into graduate school, something he wasn’t planning at the time.

But it didn’t matter that he didn’t have the highest grades. Nor did Byrd let a lack of funding stop him. He applied for and got scholarships and networked his way into Fike’s program, signing a contract promising to keep a high grade point average, he said.

Earlier this year, Byrd graduated with an advanced degree in crops, soils and environmental science, and a lot of experience planting, tending and harvesting a crop that has been gone from America’s fields since the 1970s, banned by the war on drugs.

It was a career that came out of left field for the Southside Richmond native, who came up in the inner city with a dream to play football for the Hokies.

So, he had to concentrate on school.

“Sports is kind of what brought me here to Tech, and agriculture is what kept me here,” Byrd said. “The first time I interacted with a horse and cow, I was scared to death. But it was more of the unknowns that … kept me interested.”

And while he was studying and growing the hemp for industrial uses, things changed. He’s no longer a lone voice advocating for the industry, but one in a virtual cacophony.

Even in Southwest Virginia.

Locally, customers can sprinkle CBD tinctures into a fresh-fruit smoothie at Floyd’s Revolution Juice or buy an $8 “PreRoll” hemp cigarette from The Buffalo Hemp Company. A section of Pulaski County along Interstate 81 literally bristles with TruHarvest Farm hemp plants, owned by Matt Hagan.

Today, Byrd’s a 25-year-old farmer cultivating six acres of hemp in the Ellett Valley. And he’s a partner in three businesses, including a Radford storefront, Rise & Shine Botanicals, where he sells hemp-derived products, from bath salts and body creams to tinctures and extracts. His “Pet Calm” CBD tincture is a particularly good seller, Byrd said.

On a recent Tuesday morning, Byrd arrived at Paris Mountain Farm to find Doug Chancey hard at work stripping hemp leaves and flowers off plants he and Byrd have tended all growing season. Fans moved air around an old livestock barn converted for hemp drying on the 600-acre farm owned by Chancey’s wife, Betty Hahn.

The couple, who inherited the land from the late T. Marshall Hahn — former Virginia Tech president and paper company executive — have remade the operation. While they still lease some of the property for cattle production, they are focusing on sustainability, and hemp is a major part of that. The couple partners with Byrd and another grower to produce the crop.

T. Marshall Hahn bought the farm, which was established in the 1700s by the Hoge family, in the 1960s. Betty Hahn has said she grew up there and considers herself a native Appalachian.

Hemp has a long history on the property, Chancey said. “It was cultivated here up until the Civil War.”

Chancey said he used to tell his father-in-law that industrial hemp could be the next major source for paper production, a claim the older man met with skepticism.

But Chancey was undeterred.

“I always told my father-in-law I would be a hemp farmer if it ever became legal,” Chancey said. And he’s working to make good on that promise.

Before he got into the business of hemp, Byrd said he was moved by images on television of children with severe epilepsy finding some relief after taking hemp oil extract, also called CBD.

Through all the hard work to become a hemp producer, Byrd said he was inspired “knowing that from seed to shelf, I would be helping somebody.”

The U.S. Food and Drug Administration did eventually approve a drug, Epidiolex, based on the cannabis derivative to treat rare and severe epilepsy. But the agency is also sounding a warning.

During the Epidiolex approval process, the FDA said it “identified certain safety risks, including the potential for liver injury,” which can be managed under medical supervision, according to the agency. “But it is less clear how these risks might be managed when CBD is used far more widely, without medical supervision and not in accordance with FDA-approved labeling.”

Concerns center around possible accumulation of CBD in the body, interactions with other substances including medications and the impact on vulnerable populations, including the elderly, children and women who are pregnant or breastfeeding.

And, despite the expanding market for CBD products for pets and other animals, FDA has not approved those uses.

In testing of some cannabinoid products, too, “many were found to not contain the levels of CBD they claimed to contain,” according to FDA. “We have also heard reports of CBD potentially containing contaminants” including pesticides and heavy metals, according to the agency.

Byrd said that purity and trust are two of the benefits of locally produced hemp products.

“The whole goal has been to create this vertically integrated model where we can help people,” he said. “And we have that control from seed to shelf.”

Previous From hops to hemp: Farmers look to cash in on CBD craze - KOIN.com

Ohio Farmers Another Step Towards Hemp In 2020 – HempGazette 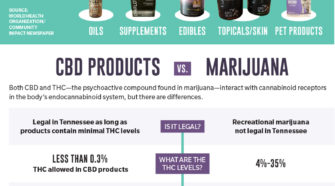