Roxann Roche doesn’t expect to get rich farming. She and her husband both have other jobs. She’s a gardner. He’s a mechanic. And like many for the past few years, their small family farm in northwestern Connecticut operated at a loss.

“It’s really hard to make a living farming,” Roche said. “We are always looking for something that has value.”

So, like dozens of other Connecticut farmers this season, she’s growing hemp.

For decades, growing hemp in America was illegal.  Despite centuries of harvests, the crop, which is a close relative of marijuana, became ensnared in the nationwide war on drugs.

But recent updates to federal and state laws changed that, which means in the coming weeks, dozens of Connecticut hemp fields — the first in more than a generation — will be ready for harvest.

“I’m learning how to do this, just like everybody else is. This is such a new thing. There’s a lot of information out there. Some of it is right. Some of it is wrong,” Roche said.

Changes to the federal Farm Bill in 2014 paved the way for farmers to begin growing hemp, if they follow certain state guidelines. Connecticut passed its guidelines earlier this year and, so far, it has licensed more than 80 growers.

Hemp is a cannabis plant. Bred for its non-psychotropic cannabidiol, which is called “CBD.” That makes hemp different from marijuana, which is filled with more “THC” that produces that plant’s high.

But right now, CBD is riding its own high. Harvested from plants like these to fuel a wellness industry of lotions and pills projected by some to grow into billions of dollars in the next decade.

Roche carefully worked her way through an electric fence that keeps livestock clear of dozens of penned-in hemp plants. She took out a pair of clippers and a small brown bag and began snipping her plants, taking off a few inches of flowers, where there is the highest concentration of CBD.

The flowers were put in a bag, which she later took to the Connecticut Agricultural Experiment Station for testing.

It’s a test that’s required by state law. Because if THC levels test “hot,” that hemp plant is now, technically, a marijuana plant. Which means it’s destroyed, at a total loss for the farmer.

“I’ve seen a lot — surprisingly — a lot of different kinds of pests.”

Like crickets on her plants and sap-sucking aphids that can damage leaves.

This season, Ghimire has traveled around the state. Checking in with hemp farmers to help them keep an eye out for pests.

“In one field that I visited … 80 percent of the field was completely damaged by deer,” Ghimire said.

And Ghimire’s been working to get another message across: male plants are bad.

That’s because males release pollen. If that pollen gets into female hemp flowers, “the whole plant directs its energy toward seed production,” Ghimire said.

Which drastically cuts down CBD and a farmer’s profit.

Still, how much money is an open question, said Brent Young with Colorado State University Extension.

His state has been growing hemp for several years alongside marijuana.

Young said if you want to know the price for a more established crop like corn, you can just whip out your smartphone and look it up.

“Unfortunately, right now, that’s not the case with hemp,” Young said. “If someone wanted to know what the price of hemp seed or hemp fibre, or hemp flower for CBD — we have no idea what it is.”

“The buyer typically has more information because they’re buying from multiple sources,” Young said. “The farmer tends to be more isolated in that situation and just not aware of what’s being paid for the commodity.”

Unlike more established crops, there aren’t universal standards for the seeds that farmers can buy.

Still hemp farms continue to grow. In Colorado, Young said there are about 80,000 acres registered to grow hemp. In New England, all states except New Hampshire have issued licenses to hemp growers over the past five years.

Back at RD Farm in northwestern Connecticut, Roxann Roche said her investment in hemp wasn’t huge. About fifteen-hundred bucks.

“We are being optimistic but cautious. I think most farmers are,” Roche said.

So if the crop doesn’t pan out, she said her farm will be OK.

But Roche said, either way, she wants to grow hemp again next season.

After all, for a crop that’s been out of Connecticut soil for decades, it might take a few growing seasons for farmers and regulators to beat their way through all the weeds.

Previous Hemp takes a hit in Asheville - The Blue Banner 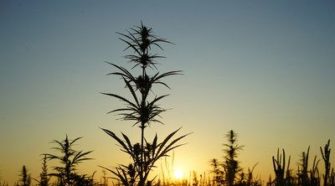