HEADLAND – Hemp-derived CBD products seem to be sold everywhere these days, from your local health supplement store to wellness boutiques to big box retailers. You might even find such products at a convenience store.

Growing the hemp plants to produce the cannabidiol, or CBD, for those products is not as simple.

Specialists with the Alabama Cooperative Extension System hosted an industrial hemp production meeting in Headland on Friday, the first in a series of meetings they are holding around the state through the end of March. Highlighting everything from the economics of hemp to pest and weed management, the meetings are geared toward anyone with an interest but particularly growers.

Last year, Alabama joined other states in issuing permits to hemp growers and producers after the 2018 farm bill removed hemp as a controlled substance and made it an agricultural commodity. But with only one year under their belts, the lack of relevant information may still be the biggest hurdle for many Alabama growers.

“There is a lot of information out there but the problem is we’re missing a lot of information that would be relevant to Alabama,” said Joseph Kemble, an Extension vegetable specialist and Auburn University professor. “This is a crop that we don’t have a history of growing in this state.”

For example, there’s a lot of hand labor with hemp and plant varieties are still being studied to see which would work best in Alabama, Kemble said. There are a lot of technical growing issues such as how to keep hemp cool during hot summer temps and how to make sure the plants get enough daylight and water without getting too much.

Kemble said he suggests growers determine where they will sell their product before they even plant. And, he said, growers shouldn’t invest more than they can risk losing.

“It’s challenging,” he said. “There’s potential, but right now, unfortunately, the way the numbers look, there may be more production than we can handle … The market is trying to figure itself out.”

Every state has its own rules when it comes to hemp, which adds to confusion. And the Extension specialists at Friday’s meeting have had to rely on information from other states that have been growing hemp since the 2014 farm bill allowed the crop to be grown for research programs.

The problem with relying on basic information from states in the Pacific Northwest or even other Southern states like Kentucky and Tennessee is that the climate in those states doesn’t exactly match the climate in Alabama, said Katelyn Kesheimer, an Auburn University assistant professor and Extension specialist.

“Alabama is unique – it’s in the Southeast, we have a different climate,” Kesheimer, whose specialty is entomology, said. “All those environmental conditions really impact agriculture and how a crop grows. The varietal selection, the pest pressure, the weeds, insects, diseases, the soil, the weather – everything is really unique.”

Kesheimer said until Extension specialists fully research hemp as a crop in Alabama, there are some answers they just won’t have. Universities must have a permit to do hemp research and Auburn University did not have one for 2019.

“We’re trying to catch up as quickly as we can and provide information,” she said.

Gathered in a meeting room at the Wiregrass Research and Extension Center, attendees came from all over to hear what information extension specialists have learned in the past year. There were growers from west and north Alabama looking for information before they jump into the field.

Jerry Martin of Martin Grain Systems in Virginia came to the meeting with a hemp dryer his company began manufacturing after three customers requested hemp dryers.

“Everybody is learning,” Martin said.

Alabama received 800 applications for the 2020 Hemp Program and notified permit recipients in January.

Kathy Holliman attended Friday’s meeting in Headland to learn more before she and her partners plant nine acres of hemp on three different sites in Lamar County. The numbers on yields and profits from hemp vary depending on the source, she said, and getting information on the best approach for growing and processing hemp has been a challenge.

“I’m getting more confused,” she said. “We’re into it, though. We’re invested.” 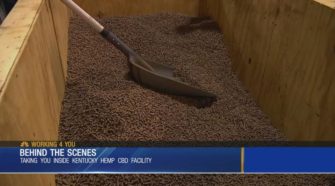