In late spring, Scott Ruggles quietly went about planting 24 acres of industrial hemp on his farm in White Lake Township and another location in Holly.

Ruggles is one of an estimated 600 Michigan farmers licensed to grow hemp through the state department of agriculture in the first year it is allowed as an agricultural crop.

“We’re just learning,” said Ruggles, as he prepared to harvest his first hemp crop this month. “Everything was kind of by the seat of my pants.”

Farmers across the country hope that hemp – illegal to grow for decades – may be a new source of revenue with multiple productive uses.

But this year, growing it is an experiment.

“It’s very unique,” Ruggles said. “There’s no baseline on yield. There’s no pricing that exists. It’s not traded like corn or soybeans.”

For early settlers of the U.S. hemp was important for the production of necessary items like rope, canvas, paper, clothing and animal feed.

A strain of the cannabis plant, it was prized in part because of its variety of uses and because it’s a fast-growing plant.

But it was replaced as the textile of choice by cotton farming and the introduction of the cotton gin in the late 1700s, according to the website www.ihempmichigan.com.

Hemp faded into economic oblivion in 1937 with the passage of the Marijuana Tax Act, but resurged briefly during the shortages of WWII.

The Controlled Substances Act of 1969 made cannabis, including hemp, a schedule 1 drug, on par with heroin, and hemp was again illegal to grow.

That changed in 2018 when the newest federal farm bill reclassified industrial hemp as an agricultural product, allowing farmers to grow it as long as the levels of the psychoactive ingredient THC were below a very low level.

While 2019 is largely an experimental year for Michigan farming of industrial hemp, acreage grown in other states is rocketing upward.

More than 78,000 acres of hemp were planted in 2018, according to the website votehemp.com, with two-thirds of it in Colorado and Montana. That acreage nationally soared to more than 511,000 acres in 2019 after passage of the farm bill and as more states enacted enabling legislation.

In Michigan, hemp growers are licensed through the Michigan Department of Agriculture and Rural Development. Michigan has processed 541 grower registrations covering 32,243 acres, and another 389 processor-handler licenses.

The state definition of industrial hemp is that the THC content level be below 0.3%, and the rules require growers submit plants for testing before harvesting.

It’s a crop Michigan welcomes, according to Gov. Gretchen Whitmer.

“Michigan is uniquely positioned to grow, process and manufacture industrial hemp. We are one of the nation’s most agriculturally diverse states – growing 300 different commodities on a commercial basis – making it a natural fit,” Whitmer said in April when the state announced its requirements of farmers growing the crop.

“This emerging crop not only cultivates new opportunity for our farming community, but it also creates an avenue for new businesses to crop up across the state,” Whitmer said, perhaps a little tongue-in-cheek.

Ruggles’ first experience with hemp taught him that the seed is “very temperamental,” but “hardy in the field.”

But it has been difficult keeping the weeds at bay. And then, there’s the weather.

“Now it’s cold and rainy,” Ruggles said. “We’re worried about that. We don’t have any way to combat it.”

Even so, Ruggles estimates he might yield 10,000 pounds of plants. At $400 a pound for the flowering tops of the plants, and $30 a pound for the leaves and stalks, it has the potential to be a lucrative crop for Ruggles and other Michigan farmers.

He hopes to harvest his first industrial hemp crop within the next two weeks.

Harvesting this year will be done the old-fashioned way – by hand.

“We pick all the pumpkins and sweetcorn by hand so we’re used to a little manual labor,” Ruggles said. 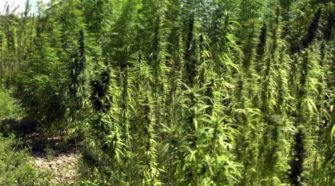 Florida has high hopes for hemp, but scientists warn state may get burned – FOX 13 Tampa Bay