CORNING, Mo. — Industrial hemp, once a significant cog in a Missouri economy of days gone by, is poised to rise once again as a contributor to the state’s agricultural playbook.

The possibilities of raising an industrial hemp crop in Missouri was one of the major topics Tuesday at the annual Graves-Chapple Field Day held in southern Atchison County. Several small plots were planted on the center’s grounds in late June, and other demonstrations have been started at various sites across the state.

Greg Luce, whose duties include acting as grains crops state specialist for the University of Missouri Extension Service, was among presenters at the field day and focused on hemp’s potential uses. For example, fiber from the plant can be made into fabric for clothing. Other varieties of hemp are used to produce CBD oil, used to treat pain and for other health conditions.

Hemp was a popular manufacturing product in the 1860s and 1870s in Missouri, Luce said, and flourished into parts of the 20th century ahead of federal drug laws. It also was prevalent in Kentucky during the same times, and that state currently maintains a foothold over Missouri in research and development.

Legislation that allows for the commercialization of industrial hemp became law in June. Rules created for a pilot program must now be revised before growers can seek permits from the Missouri Department of Agriculture. The university is conducting an economic assessment of hemp.

Yet one existing drawback to growing industrial hemp is a lack of herbicides, fungicides and insecticides to assist the plants. State researchers are seeking to drill down on that issue and others that could thwart hemp. The plant does not do well in wet conditions.

“That could be a problem,” said Luce. “We have some weeds in Missouri. … We’ve got a lot of things to learn. … We’re learning a lot about it already. … We’re very fledgling. … We’re starting from scratch.”

During his talks to farmers, he passed around a vial that contained hemp seeds.

Industrial hemp is not to be confused with marijuana in its capabilities and is therefore not regarded as a drug. Jim Crawford, who serves as superintendent at Graves-Chapple, said he is nonetheless considering running a couple of sample tests on the plants to gauge their content of THC, which is the main psychoactive compound found in marijuana and also is found in its cousins. Hemp only contains minute amounts of THC.

“It was something we’d be able to do,” said Crawford about Graves-Chapple’s interest in volunteering to raise the test plots.

No industrial hemp plants will be harvested this year, and the Extension facility intends to keep growing the plots in 2020.

The department said it intends to have the permit applications ready to go online in the fall.

Next How Colorado's keeping up with the hemp industry - 9News.com KUSA

Analyst’s Notebook: How your hemp business is affected by the new data landscape – Hemp Industry Daily 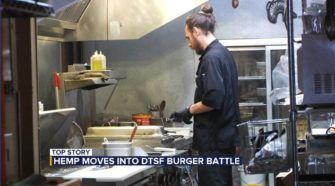