Hemp can be grown for seed, fibre or both, as well as cannabinoids, and agronomics depend in part on the crop’s end goal

MEDICINE HAT, Alta. — Results of hemp research trials in Alberta are providing guidance on the agronomics of the crop.

Because hemp can be grown for seed, fibre or both purposes, plus cannabinoids (CBD), agronomics depend in part on the end goal for the crop. That is also the deciding factor in variety selection, of course.

Because most hemp has traditionally been grown for grain, Finola is the most popular choice in Alberta, said Slaski.

Katani is also a short stature type grown for grain, as is X59, although it is slightly taller. It doesn’t shell as easily as some other grain types.

Demand for hemp production as fibre is growing, Slaski said, adding that Canadian Rockies Hemp Corp., based in Bruderheim, Alta., is contracting 20,000 to 30,000 acres this year for fibre production.

Dual-purpose varieties that can be grown for both grain and fibre are in demand as well, and there is mounting interest in varieties that produce higher levels of cannabinoids.

“Here in Canada we are already having … varieties that have elevated CBD levels,” said Slaski. Most of the approved varieties are low in CBD but efforts to register types with higher levels are underway.

Hemp is sensitive to soil structure, Slaski told those at the Farming Smarter Cypress Conference in mid-March. It doesn’t like compacted soil and requires fields with good drainage. Soil temperature should be at least 8 C at seeding.

Hemp should be shallow-seeded at half an inch depth, at 20 to 25 pounds per acre if grain is the goal. A higher seeding rate of 40 to 60 lb. per acre is recommended if it is grown for fibre.

Slaski said seed damage can prevent emergence so a low fan speed is recommended if using an air seeder.

Seeding date is a bigger issue when growing fibre hemp as opposed to grain hemp. Because it is a short-day plant, the longer days at higher latitudes delay flowering and result in more stem elongation. Early seeding thus generates taller plants with more vegetative growth, giving northern locations an advantage for fibre production.

Slaski recommended a fertilizer regimen similar to what would be used for a high yielding and high protein spring wheat. Hemp is sensitive to nitrogen fertilizer placement so it should be side or mid-row banded or applied in a separate operation for best results.

Higher nitrogen rates will be needed for maximum grain yields than for maximum fibre yields, he said. Research data from Lethbridge showed grain yield can be increased by three to six times under irrigation. Fibre yield was best in the Falher test plot because of the northern advantage.

As for diseases, sclerotinia can be an issue, particularly if hemp follows canola in a rotation. Botryitis has also been noted in some crops, Slaski said.

Insects are rarely a problem in hemp with the exception of cutworms. 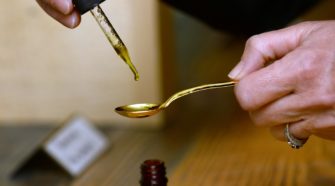