The city is waiting for state regulations before legalizing the crop

FARMERSVILLE – Farmersville City Council unanimously voted to continue an urgency hemp ban on Dec. 23, which the city first put in place in November.

Greg Gomez, the mayor of Farmersville, said the city enacted the temporary ban to wait for the state to put in place its own regulations on the crop.

“The market is wide open and there are no strict regulations in place, like with cannabis, which has many regulations” Gomez said. “It’s the wild west right now.”

The state plans to submit its plans to the federal government by May, Gomez said. Tulare County will also be putting its own regulations in place early this year.

The concerns the city has with hemp cultivation are the lack of federal, state and county regulations on the product, possible competition with cannabis and potential dangers of unregulated hemp-based vaping oils.

Tom Tucker, Tulare County ag commissioner, said the county placed a 24-month and 15-day moratorium on industrial hemp so that a meaningful and thorough program could be put together.

“We decided we didn’t want to launch into something without any unknown information,” Tucker said. “Several counties didn’t do a moratorium and just went right into cultivation. And they’re having to come to terms with all these conflicts, like no regulations and unclear regulations.”

The California Department of Agriculture has created a set of regulations on industrial hemp, however, it will need to be approved by the USDA once the federal program is official, Tucker said.

Tucker said he hopes to have an ordinance ready for county approval by spring 2020. The ag commissioner’s office held a review of the county’s draft plan on industrial hemp on Dec. 12.

Roughly 40 people came to hear about the ordinance, which is expected to come into effect by spring of this year.

Some of the regulations included in the ordinance are that only three agricultural zones will be permitted for hemp grows, farmers are expected to grow a minimum of 20 acres and a hemp field is required to have a 100-foot barrier between the crop and its neighbor.

Tucker said the primary reason to only permit hemp in AE-20, AE-40 and AE 80 zones is industrial hemp is similar to cannabis, in smell and appearance, and this will allow the county to control where it can be grown. Those three zones are far away from urban areas.

This rule ensures that a hemp field is at least a quarter mile from cities, parks, churches, schools, daycares or any other place designated “sensitive” by the ag commissioner. The field must also be 200 feet from a non-grower residence. To grow indoors, the grower must use a structure designed for ag use, like for cultivating nursery plants.

“This is an agriculture crop and we are going to treat it that way,” Tucker said.

Going forward, the commissioner’s office will consider the comments from the Dec. 12 hearing and make any necessary changes. Then the plan will need approval from the Tulare County Agricultural Policy Advisory Committee before it’s sent to the Tulare County Board of Supervisors for final approval. 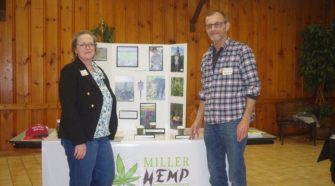