A pick-your-own hemp farm has opened its fields in Whitefield, Maine – it’s the first such model in the state and believed to be just the second publicly accessible hemp farm in the U.S., the Portland Press Herald reports. About 50 showed up to Sheepscot General Farm to pick their own hemp plant.

The owner, Ben and Taryn Marcus, planted about 7,000 plants on 3 acres following the federal legalization of hemp last year. The plants were tested for THC by the state Department of Agriculture, Conservation and Forestry and did not exceed the 0.3 percent THC threshold as required by federal and state law. The couple said, if processed correctly, the plants should contain between 15 and 20 percent THC.

“We always wanted to do a pick-your-own, like we do with strawberries. But this has gotten a lot more attention than strawberries, that’s for sure. It was a great crop to grow, easy to do, but it’s not a crop I’d want to harvest by myself. It’s time consuming. But these people, they’re thrilled to pick.” – Ben Marcus, to the Press Herald

According to a New Frontier Data report, the number of hemp licenses in the U.S. quadrupled since the passage of the farm bill and they estimate that 480,000 acres of hemp was cultivated this year – a 328 percent increase year-over-year and more hemp than was planted during the crop’s 1943 peak during World War II.

The Marcus’ said they will harvest whatever isn’t sold via the pick-your-own model next week.

Next Hemp Harvest - The Carroll News 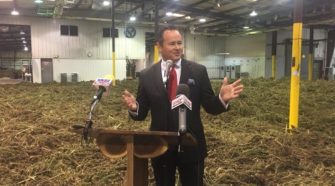