Delaware Farm Bureau member and local farmer John Foltz said he supports the measure and is looking forward to watching the program grow along with the hemp he has already started to farm through the state’s research program run by Delaware State University. He said over time, the domestic hemp program will give farmers more freedom as it expands.

“The rules that are in place need to be expanded upon in the very near future,” Foltz said. “For right now, I think that Delaware is in a very good position for the Delaware Farm Bureau to work together with our neighboring states, especially being on the Eastern Shore, to allow these businesses to interact across state lines without a whole lot of red tape. The more we lessen that red tape and lessen the rules, the more we will be able to expand.”

Foltz and DFB President Richard Wilkins say the program could serve the state well as it expands the industry, which will soon need hemp processors as production increases in Delaware.

“I think that’s going to be the big nut to crack by needing to have places for these processors to go. I believe that Delaware has a better business atmosphere for that to take place here and it will benefit the whole shore. I appreciate that the Delaware Farm Bureau will be involved in this issue as it develops,” Foltz said.

The nonprofit organization, now in its 75th year, is in the process of organizing the first industrial hemp growers’ group in Delaware, which Wilkins hopes will serve as an advisory group for the industry.

“We will continue to endeavor to improve the ability for Delaware’s budding industry to be able to better fill the demand for the beneficial uses of this new alternative crop,” said Wilkins.

While the Delaware Domestic Hemp Production Program will be regulated by the state, Wilkins emphasized that hemp products manufactured for human and animal consumption will remain under the authority of the U.S. Food and Drug Administration.

Hemp products covered under the program could include textiles for clothing or industrial uses, paper, building materials and other products.

Next Aiming for a sustainable lifestyle? Hemp bedding is what you should be sleeping in - Real Homes 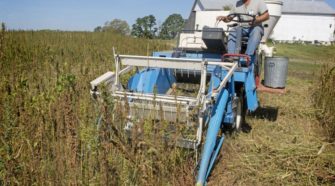