WINDSOR (WBNG) — The hemp industry is taking over the Southern Tier, and technology is helping.

North Windsor Berries is getting in on the action.

The farm started growing hemp back in May. But when you’re doing anything for the first time, it can be tough.

Titus says he was able to get an organic fungicide from Canada to help.

“You can’t grow anything in this state without something to combat the bugs and the diseases,” he said.

Spraying that on all of his hemp crop also proved to be challenging.

That’s when he called on his friend Mike Harris, a farmer himself who had an idea years ago.

“Wouldn’t it be nice to use a drone, and the technology associated with drones to make this whole process a lot easier?” said Harris.

“This just made sense. He could just come and fly over it. And actually the drone is perfect because it beats the spray right down into the plant where you really want it, where I’m driving along beside it and hoping,” said Titus.

Harris says using the drone is easier, and more effective. It’s able to spray all three acres of hemp at North Windsor Berries in less than 20 minutes of flight time.

And not only does it evenly spray fungicide, but it also can pinpoint where a problem is.

“The drone technology is really great because it allows us to look at the crop health and make determinations as to where it is. You still need to ground truth, that is to go out and look at the plants, and understand what issues they’re facing and then we’re able to fly over the crop and very precisely place the product over the crop canopy,” said Harris.

The owners of North Windsor Berries say the hemp should be ready to be harvested in about three weeks. 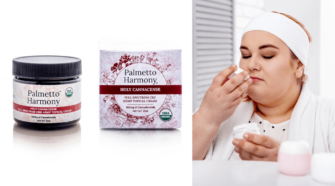