Joseph Sisk and Jerry Gilliam have known each other for years, and Sisk, a south Christian County farmer whose crops include hemp, said he’s proud of Murray State University’s efforts to promote the plant at its Hutson School of Agriculture.

So proud that he and his wife Lisa recently made a donation to MSU that made possible the creation of the Clara Gilliam Fund for Excellence.

The MSU Hutson School of Agriculture planted the first legal agricultural hemp research plot in Kentucky in 2014, and the university has been cited by U.S. Congressman James Comer as the first university in the country to participate in the hemp pilot program, according to information on the MSU website at murraystate.edu.

“It was the first hemp planted in the U.S. as far as an ag research institution (at a) university,” said Sisk, who found the connection between his friendship with Gilliam and MSU to be a fitting one.

Intended to support the university’s new Murray State Center for Agricultural Hemp and the growing hemp and CBD industry, the fund is named for the Gilliams’ daughter Clara, who has been diagnosed with Aicardi syndrome, a rare genetic disorder that typically affects females.

Jerry Gilliam is a magistrate on the Christian County Fiscal Court and works for AgQuest Financial Services in Hopkinsville. His wife is an agriculture teacher at Todd County Central High School in Elkton.

One aspect of their daughter’s illness is seizures, and those seizures can be treated with medical cannabis oil. The Gilliams had lobbied John Tilley, then the Democratic House judiciary chairman, and Whitney Westerfield, the Republican Senate judiciary chairman, to push a bill that allowed cannabidiol, a compound found in the cannabis flower, to be prescribed by doctors at state research hospitals.

That bill, known as the Clara Madeline Gilliam Act, passed in 2014.

Gilliam noted that using the cannabidiol prescription, or epidiolex, dramatically reduces the number of seizures his daughter has.

“If we can reduce the seizures, then we know her chances of development are going to be greatly enhanced,” Gilliam said.

He noted that his alma mater has been active in researching the hemp crop and gathering support for it, and Gilliam said he can see where the university can help farmers and others in the hemp industry find out what works and what doesn’t in terms of the plant’s medical uses.

He emphasized that researchers need to discover what is in the cannabidiol, or CBD, that is working to address certain health issues.

“It’s not about making cannabis available to everybody and anybody, but (it’s about) seeing what in the cannabis has those medical benefits,” explained Gilliam, who added that he would like to see some peer-reviewed scientific research conducted on the hemp crop.

He noted that the fund named for his daughter will support the Murray State Center for Agricultural Hemp, which was established in March and conducts various activities in support of the research, education, development and promotion of hemp.

Dr. Tony Brannon, dean of the Hutson School of Agriculture, said the fund as of now will help with the growing aspects of hemp and will feed into the center’s activities; it won’t perform specific research on CBD.

“We hope this fund continues to grow and support the Center for Agricultural Hemp at Murray State,” said Brannon, who’s known the Gilliams since the days they were his students at the MSU campus.

Brannon also said the fund will help make a great impact since there is no federal or state funding for hemp research right now.

Of the creation of the fund, the dean noted he was aware of Clara Gilliam’s situation and had a goal to assist in some way. The new fund, he said, was established in coordination with a seed donation from Joseph Sisk, “who wanted to spur hemp development and give back to the industry and also honor Clara,” Brannon explained.

Sisk noted he grew up with Jerry Gilliam and knew him very well.

He and his partner have been involved in the “CBD hemp deal” for several years and wanted to be sure there was something at Murray State for the needs of the hemp industry and future research.

Additionally, Sisk said it’s important to him and his wife that there is money for research to help Clara and others with similar needs.

“It is really important that the hemp growing and hemp processing industry steps up and funds research to better the crop, especially as it pertains to research that can help kids like Clara,” Sisk noted.

Gilliam said it’s very humbling that a friend would establish something like this in their daughter’s honor.

“Joseph and I have been friends since grade school so it was very humbling his wanting to do that,” Jerry Gilliam said. 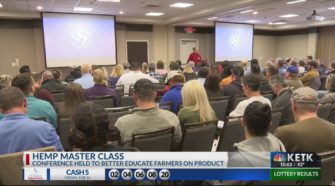