YELLOW JACKET – Some Southwest Colorado farmers planted hundreds of new acres of hemp this year pursuing big profits, but many have faced problems such as disease, unproductive plants and a cold spring.

Hemp is a promising cash crop for area farmers because it contains CBD, a chemical used in many products, such as oils, tinctures and creams that promise relief from myriad symptoms, including pain, anxiety, insomnia, seizures and other conditions.

Many farmers are growing hemp for its flowers because they contain high concentrations of CBD. In August, a pound of CBD flower was selling for $100 to $700 across the U.S., according to Hemp Benchmarks, a cannabis data company.

The high prices have caused a bit of a “gold rush” into the industry, drawing in some new producers who have no agricultural background, said Katie Russell, manager and research scientist for Colorado State University’s Southwestern Colorado Research Center in Yellow Jacket.

Hemp is also opening opportunities for farmers who have faced drought and low prices for years for commodities such as wheat and beans, she said.

“You have got this whole spectrum of folks getting into it, from young to old, likely some folks that would be very against the other cannabis industry but see this as a commodity crop,” Russell said.

The Colorado Department of Agriculture expects 40,000 acres of hemp will be harvested this fall, up from 15,000 acres last year.

If prices for hemp hold up as more acres are planted, hemp could become a staple of Colorado agriculture, Russell said.

“I think it could be a reasonable high-value, reduced water-use crop,” she said.

But this year, some farmers are seeing reduced crop yield, or even crop failure, for numerous reasons, including a cold spring that caused some hemp seeds to rot in the ground and delays getting necessary supplies, such as black plastic and drip irrigation lines as a result of companies becoming overwhelmed with demand.

Disease was another major hurdle for producers. For example, beet curly top virus was widespread in hemp crops on the Western Slope, she said.

The virus is carried by leafhoppers and can twist plant leaves or petals. The virus can kill young hemp plants or stress them out, potentially reducing their CBD yield, Russell said. No chemicals are currently approved to treat disease or pests in hemp, which makes it tough for her to advise new farmers.

Farmers can rotate their crops, which can help prevent the virus, but some new farmers aren’t planning on growing anything but hemp, which could be problematic, she said.

Farmers have also struggled with male hemp plants being mixed in with female plants. When male plants come up in the ground, they must be eliminated so they can’t pollinate female plants and reduce CBD production, Russell said.

A hemp plant at Colorado State University’s Southwestern Colorado Research Center in Yellow Jacket has beet curly top virus, a disease that is widespread in hemp crops on the Western Slope.

When female plants get stressed from drought, disease or other factors, they can become hermaphrodites, which can reduce CBD production.

First-time hemp producer Theresa Ancell and her family had to destroy 60% of their plants because they were male, she said.

“It really set us back,” she said.

Ancell’s parents have raised hay their whole lives in La Plata County. They decided to grow hemp as a way to supplement the family’s income.

But as of this week, about two weeks before harvest, the family isn’t sure if they will turn a profit or plant hemp again next year.

“It’s really still up in the air,” she said. “It just depends if we can even get our money back at this point.”

However, Ancell does have a buyer, which is more surety than some farmers have.

Russell said most of the producers she has worked with plan on harvesting and testing their hemp for CBD quality before marketing it, which is risky.

“The supply-demand part of this is going to be an interesting scenario to see play out. Is there too much hemp being grown for the market? Is the quality of the hemp that was grown good enough for market demand? All of that is unknown,” she said.

Jerry Mahaffey, left, a farm technician, at Colorado State University’s Southwestern Colorado Research Center in Yellow Jacket, and Neeta Mahaffey, administration assistant at the center, cut samples Thursday from about 200 hemp plants that are part of a research project at the center. The center has fielded numerous calls from farmers this season about hemp and challenges, such as disease.

There are other unknowns for the blossoming industry as well, such as how it will be regulated and how the demand for labor could be met, because unlike hay, hemp must be harvested and planted by hand.

But it could hold business opportunities as well, for those interested in providing services to the industry, such as testing for disease, Russell said.

“There is an opportunity there to capitalize,” she said. 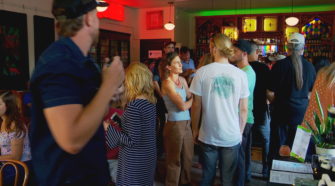