Not that the expanding patchwork of licensing regulations for hemp programs throughout the United States can be confusing and uneven, but had Johnny Appleseed faced all the challenges now confronting prospective American cultivators, he might have just stayed home.

Make no mistake: Industrial hemp represents booming business, which is why so many states are encouraging its cultivation after decades of federal prohibition. Yet, due to that U.S. policy in effect since 1937 (with exception to meet supply shortages during World War II), there are few instances where state regulations or standards have ranged so broadly for producers within the same industry.

Consequently, while the industry awaits word from Capitol Hill about hemp reform legislation and the 2018 Farm Bill, the differences in approaches currently being taken by various state regulators can be puzzling. Due to the crop’s legal limbo at the federal level, hemp growers need special licenses from their respective legalized states, which translate to paperwork and processing fees. Applicants may be subject to criminal background checks, and most states have testing programs to ensure that cultivators’ yield do not exceed the legal threshold of 0.3 percent THC. If they do, in most cases, their entire crop is destroyed. Some states, like Montana, are using certified seed from Canada and do not require testing.

While Montana charges a simple flat fee of $450 for a hemp license, the cost to register in Pennsylvania is $2,000, which depending on a farm’s size may or not work out to be a relative bargain. While North Dakota demands a yearly fee of $150 and an additional $25 per acre farmed, Kentucky charges an initial $150 and only $5 per acre; as hemp is grown for industrial applications rather than produce markets, 50 acres is a practical minimum for profitability, with a few hundred acres not surprising for a solid business model.

That said, while Oregon charges $1,300 for a hemp license, it requires $4,750 (3.7x more) for a license to grow its psychoactively potent cousin, marijuana (which has anywhere from 3 to 15 percent THC by weight).

More drastically, the State of Washington last month proposed hiking the cost of a hemp permit by 2,400 percent (to $7,500 from $300) as its Department of Agriculture sought to cover costs in regulating the crop. In the same proposal, the department aimed to multiply the cost of a license to both grow and process hemp from $300 to $14,500 (48.3x), and increase a license to distribute seeds from $300 to $7,500 (25x).

Especially by dint of its outsized market and overall agricultural output, California serves as a natural case study for the status of hemp among the United States. Yet while Governor Jerry Brown recently signed a bill to promote industrial hemp farming, the nascent industry remains at the mercy of what many decry as a slow-moving state bureaucracy. Despite having adopted a statewide cannabis market for adult use, for all intents and purposes the Golden State currently has no licensing or registration program in place for hemp cultivation.

Amid the challenges and growing pains of opening the framework for that adult-use market in what represents the world’s sixth-largest GDP, hemp has so far been given relative short shrift in California in comparison to other states – especially for a market estimated to be worth between $225 million and $250 million, or some 20 percent of the 2018 U.S. hemp market (pending year-end sales data).

As things stand in California, only specific educational institutions are prohibited to grow industrial hemp, and the California Department of Food and Agriculture (CDFA) remains in the process of establishing an industrial hemp program. So far, the CDFA has established that growers by law must register with their local county agricultural commissioner. That noted, state officials have not yet made registration available, so farmers meanwhile cannot plant the crop.

Last spring, the Industrial Hemp Advisory Board approved a one-page registration form and set a fee of $1,200. The form, awaiting CDFA’s finalization, includes basic information: the business name and address of the grower; location of the grow site; and whether the crop is intended for fiber, flower, seed, or a combination of those purposes. No current timeline for opening registration has been made available.

J.J. McCoy is Senior Managing Editor for New Frontier Data. A former staff writer for The Washington Post, he is a career journalist having covered emerging technologies among industries including aviation, satellites, transportation, law enforcement, the Smart Grid and professional sports. He has reported from the White House, the U.S. Senate, three continents and counting. 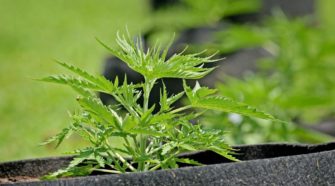