GENEVA — As the hemp industry grows, producers face the challenge of cultivating a crop that has received comparatively little scientific study, and that can become unusable — and illegal — if it develops too much of the psychoactive chemical THC.

Cornell researchers have determined that a hemp plant’s propensity to “go hot” — become too high in THC — is determined by genetics, not as a stress response to growing conditions, contrary to popular belief.

“Often that issue of going hot has been blamed on environment,” said Larry Smart, senior author of a recent study and professor in the horticulture section of the School of Integrative Plant Science.

The study, “Development and Validation of Genetic Markers for Sex and Cannabinoid Chemotype in Cannabis Sativa L” was published last month in Global Change Biology-Bioenergy.

Smart and his team conducted field trials at two sites, in Ithaca and Geneva, studying the genetics and chemistry of 217 hemp plants. They found that differences in growing conditions between the sites had no significant influence on which chemicals the plants produced. But when they compared the CBD (cannabidiol) and THC levels of each of the plants against their genomes, they found very high correlation between their genetics and the chemicals they produced.

Hemp and cannabis are both of the family Cannabis sativa, but hemp plants produce low levels of THC (0.3% or less), whereas cannabis plants typically contain 5% to 20% THC. Hemp has high levels of the medically useful chemical CBD, while high-THC cannabis contains minimal CBD.

“The molecular assays developed in this paper provide useful tools in breeding hemp,” Toth said. “To keep THC levels low, ensuring a lack of THC-producing genes will be important for the development of future compliant cultivars. Molecular testing is also much quicker and less expensive than current methods, and it can be done on seedlings instead of mature plants.”

While conducting the research, the team also discovered that as many as two-thirds of the seeds they obtained of one hemp variety – which were all supposed to be low-THC hemp — produced THC above legal limits.

The researchers hope their work will help address this problem by providing breeders with easy-to-use genetic markers that can be utilized much earlier on seedlings and both sexes of plants. CBD and THC are produced by only females, but breeders may be using a male plant for cross pollination without knowing if it has genes for THC production, until it appears in their female offspring, Toth said.

The team also developed genetic markers to determine the sex of hemp plants prior to flowering, since the sexes of young plants are indistinguishable. “This technology is, at this point, too expensive for farmers to use on an entire field, but it will be very useful for breeders who want to separate males and females early on to better control cross-pollination,” Smart said.

Smart said future research in his lab will focus on breeding hemp cultivars — for CBD, grain and fiber — that are high-yield, legally compliant and adapted to New York’s growing conditions.

The research was funded primarily by New York State Department of Agriculture and Markets, through a grant from Empire State Development Corp. 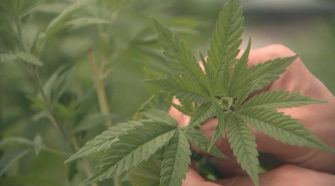