STONINGTON — Hemp may be the wave of the future for dormant farms, according to Kevin Blacker, a local farmer who has been educating himself and others about the merits of hemp farming.

Hemp had not been farmed in the U.S. for decades because it was lumped in with passage of the Controlled Substances Act of 1970, which was intended to regulate drugs with a high potential for abuse and addiction. Subsequently, knowledge of hemp farming also dwindled.

The federal Farm Bill introduced in 2014 allowed educational institutions and agriculture departments to produce hemp under certain conditions, and last December, the Agricultural Improvement Act of 2018 became law with President Trump’s signature. The new law removes hemp from regulation as a controlled substance, making it legal as an agricultural product.

Connecticut has been slower than most other states in following suit, but this year legislators took an important step by legalizing the production of industrial hemp. In recent weeks the state has set up online licensing and regulation for would-be hemp farmers.

Connecticut farmers have expressed great interest in the return of a cash crop that traditionally was used in the manufacture paper, fabric and rope. And now there is demand from the burgeoning CBD market.

CBD or cannabidiol is an active ingredient in hemp that has healing powers without the psychoactive properties of THC. Hemp must have a THC level of less than 0.3 percent to be produced legally, and must be tested for that level before harvesting.

Blacker, who rents a working farm in North Stonington, has hosted meetings to discuss the process of hemp farming with interested farmers. He laments his generation’s lack of interest in farming, noting that the average age of U.S. farmers is around 53.

“People my age are not into farming because there’s no money in it,” he said. “But I’m positive there’s a way to make money if we’re creative.”

“There are a lot of farmers that are watching hemp very closely,” Blacker said. “Like me, they’re waiting for an opportunity to make money, but the market’s got to be there.”

“I have much more of an interest in field-grown hemp for industrial purposes than for CBD,” Blacker said. “Legislation was almost entirely focused on CBD … it’s important that all the uses be looked at, like fabric, paper, animal food and pelletization for biomass furnaces.”

“From all the farmers I know, field-grown industrial hemp isn’t getting the attention it needs,” he said. “CBD is much more labor-intensive.”

Blacker also said that industrial hemp would use equipment that many farmers already have.

There is also interest in non-CBD hemp from the tobacco growers, Blacker said. Hemp could have a use in tobacco products, such as cigar wrappers, which “would be a high-value use and market.”

“CBD is good for people with small amounts of land,” Blacker said. While both CBD and industrial hemp growers apply for the same license, Blacker noted that the regulatory process for production of CBD could be “quite arduous and expensive.”

According to the Connecticut Department of Agriculture website, conditional licenses will be granted in 2019 but applicants must submit to state and federal criminal background checks. Applicants must only use certified seeds, and hemp plots must be identified by GIS coordinates. Growers must also be fingerprinted and have their crop tested for proper THC levels prior to harvesting.

Don Tuller, president of the Connecticut Farm Bureau, said in a phone interview that the hemp licensing process is “fairly involved and dictated by federal regulations.”

Hemp is no longer a controlled substance, Tuller said, but it has generated a lot of regulations because it looks so much like marijuana. Also, the THC level increases as the plant gets older.

“You have to harvest it before it reaches 0.3 percent, or it has to be destroyed,” Tuller said.

“If we have a fall like last year, it’s going to be bad for farmers,” he said. “It’s the wild, wild West but a brave new world … you’re dealing with a crop you have no experience with. Even value per acre is dependent on what’s happening across the nation.”

“If farmers get in while the value is high, they have a chance to to recoup their capital costs,” Tuller said.

Tuller noted that CBD hemp is the highest value crop, but also has the most challenges. Industrial hemp can be used for many purposes, but a manufacturing infrastructure is also needed, he said.

“The good news is there’s a $50 fee an acre for up to five acres,” he said. “We’ve kept the price reasonable for farmers, but people are going to have to learn to grow the stuff.”

“People are working through the process,” Tuller said. “It’s not sit down and fill out your form and get your license.”

“This was a major project to get this thing passed this year,” Tuller said, “just so farmers could get into it if they wanted to.”

Connecticut Commissioner of Agriculture Bryan Hurlburt said 10 hemp licenses have been approved so far, and Tuller said 65 licenses are pending.

“We did all we could to navigate this difficult challenge,” Hurlburt said Wednesday. “I think this is a great opportunity and the department has done everything it can to make it a reality.” 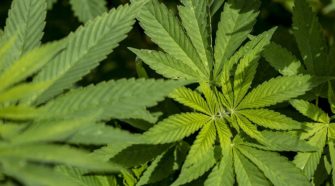 OLCC raises THC limits for some hemp products – The Register-Guard