Connecticut’s congressional delegation on Tuesday sent a letter to U.S. Secretary of Agriculture Sonny Perdue, urging him to change rules on hemp production.

Hemp comes from the cannabis plant but has lower levels of THC, a psychoactive chemical, than marijuana, and it can be used in the food, plastics and textile industries. Support for the hemp industry has seen bipartisan backing in Connecticut.

The 2018 Farm Bill required the U.S. Department of Agriculture to create regulations for a hemp production program, and the department published its rules on Oct. 31, 2019.

The delegation feels that imposing compliance requirements from the Drug Enforcement Administration at each step of growing and harvesting “adds additional financial burdens on a fledgling industry that cannot afford them.”

They worry about sanctions on growers who inadvertently exceed the acceptable THC level and want hemp treated as “any other agricultural commodity,” not a controlled substance.

The officials think a robust inspection and random sampling program is adequate, and noted that Connecticut has no DEA-registered laboratories. They also think the state Department of Agriculture should be able to address the destruction of noncompliant hemp crops without getting law enforcement involved.

Cannabis May Not Reduce Stomach Inflammation After All, But It Can Still Help Crohn's Patients: Study 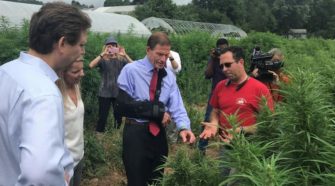