Federal officials are currently reviewing Florida’s hemp rules but the state has the authority to issue grower permits. Applications should be available sometime in March and will be available online.

LAKE ALFRED — The Florida Department of Agriculture and Consumer Services will begin issuing permits for commercial growing of industrial hemp within a month.

“Don’t spend any more money than you are willing to lose,” Tyler Mark, an agricultural economist at the University of Kentucky, told more than 50 Florida agriculture leaders and academics on Thursday at the Florida Agriculture Policy Outlook Conference 2020.

Kentucky became the leading state for commercial hemp production after experimental pilot programs for the crop were authorized in the 2014 federal Farm Bill. About 24,000 hemp acres were planted in the state last year, said Mark, a leading authority on the industry.

Mark and Jerry Fankhauser, assistant director of the University of Florida’s Agricultural Experiment Station in Gainesville, reviewed the opportunities and pitfalls of growing industrial hemp at the conference. Fankhauser is also the lead manager for UF’s two-year pilot research project on growing hemp in Florida last year.

Federal officials are currently reviewing Florida’s hemp rules but the state has the authority to issue grower permits, said Ricardo Alvarez, the South Florida regional director for the state Agriculture Department. Applications should be available sometime in March and will be available online.

“The goal is to get permits out in time for an April or May planting date,” he said.

The only cost to the application process is a required criminal background check, Alvarez said. There will be no limits to the number of permits issued or the amount of acreage approved.

The department expects a heavy demand for the permits, he said, but it expects no backlogs in processing the applications.

“The hype machine is going to continue,” Mark said. “I’m seeing a lot of producers getting into this with no agricultural background.”

Alvarez fed that hype, noting estimates that the U.S. hemp industry could reach $40 billion a year in value and that “Florida can be the No. 1 state in medical marijuana and hemp.”

If so, it will have a lot of competition, Mark said.

To date, 47 states have already or are looking into creating a hemp market, he said. Only Mississippi, South Dakota and Idaho have not acted yet.

No real answer on what variety to plant

Industrial hemp has many uses, including fibers for textiles and other materials, seeds for human consumption and animal feed, and chemicals such as cannabidiol, commonly known as CBD, derived from the flowers. Currently the biggest demand is for CBD for oils, salves and other products reputed to have beneficial health effects, Fankhauser and Mark said.

Although the UF pilot hemp program won’t issue its final report until next year, it has been working overtime to meet the demand for information from prospective hemp growers, Fankhauser said. UF has more than 20 faculty members working on hemp-related issues in a variety of disciplines, including horticulture sciences, economics, plant pathology and entomology and nematology.

Although the pilot program planted more than 30 hemp plant varieties out of more than 110 known varieties, researchers have no recommendations for those first Florida permit holders on what varieties to plant, he said.

“At this point, we don’t have enough information to make recommendations,” he told The Ledger after his presentation. “At this point, we only have a snapshot of what you can get (in hemp varieties) from countries around the world.”

The major challenge in growing industrial hemp in Florida and across the U.S. is finding plants that produce flowers with 0.35% or less of tetrahydrocannabinol, or THC, Fankhauser and Mark said. CBDs are derived from THC, the intoxicating agent in marijuana.

Any product with more than 0.35% THC is still illegal under federal law.

Federal regulations require a hemp grower to have his crop tested no more than 15 days before harvest, Fankhauser said. In fields that test above the 3.5% level, the grower cannot sell that crop.

“That’s a problem in every state,” Mark said. “The (plant) genetics are not stable.”

Growers can avoid that problem by having their crop tested throughout the growing season, Fankhauser and Mark said. They can harvest once tests show the crop approaching the 3.5% threshold.

But that means selling before the plant fully matures, reducing yields, Fankhauser said.

The cost of continual testing, at $50 to $80 each time in Kentucky, will reduce the grower’s profit, Mark said.

Will hemp flourish in Florida’s weather?

The plant tends to do better in cooler climates in northern latitudes, which also have longer days during the summer, he said. Hemp plants do not perform well in hotter climates.

Hemp plants need from 12 to 14 hours per day of light in order to flower, Fankhauser said.

In Florida, that would mean planting between late May and early July, he said. The harvesting period can be extended to the early fall.

Other Florida commodities not native to the state, notably blueberries and strawberries, have benefited from breeding programs that developed varieties that can grow well in the state’s climate.

But UF researchers are not doing any breeding research, Fankhauser said. The pilot program is working only with existing varieties imported from around the world, such as Canada, China and Europe, or in other states, including Kentucky and Colorado.

Mark presented a proposed budget for hemp production showing growers can expect a return between $1,695 to $2,052 per acre, depending upon the number of plants per acre, from CBD production. But that does not include the cost of THC testing.

It also assumes a grower can get a farm price of $1.50 per pound of dried hemp with an average of 6% CBD content, he said. CBD content can reach up to 7.5%.

But the farm price in three key markets — Kentucky, Oregon and Colorado — plunged from a high of nearly $4.50 per pound in July to less than $1 in January, according to his presentation.

It’s uncertain whether that represents a trend or just a market blip, he said.

One factor definitely driving the decrease is an oversupply of hemp in relation to the current market for CBD, Mark said.

That will continue to be a problem in the future, he added.

“I’m just not really sure we have a good handle on demand,” Mark said. 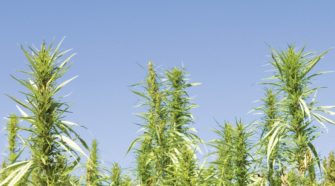