Top left: Joe Collins has been growing industrial hemp for five years. A migrant worker uses a hedge trimmer, right, to cut down the hemp while another woker, bottom, loads the plants onto a truck for transport. –

Joe Collins of Mays Lick, a farmer for more than 40 years, recently began harvesting his crop of 15 acres of industrial hemp.

Collins said he began growing industrial hemp after doing some research into crops that could be an alternative to tobacco after seeing the bad reputation the crop has been receiving.

“Every time you read the paper or turn the TV on somebody was saying something bad about tobacco and how bad it was,” he said, “and this looked like a crop that was coming on — a lot of medical benefits to it along with other benefits to as far as the fiber. Mostly the medical side of it people are figuring it out that it’s pretty good medicine.”

Seeing that hemp may be what he was looking for, Collins then applied for the Kentucky Industrial Hemp Pilot Program through the Kentucky Department of Agriculture, a program which began in 2014. According to Collins, there are several requirements that need to be adhered to in order to grow hemp in Kentucky.

“You got to get a license, find a processor that will process it for you, there’s a lot of stuff to get your license — you’ve got to go through a pretty rigorous program,” he said. “Then in the farm bill last year, they passed where it’s more of an open market for hemp so there’s a lot more people starting to do it as of this year.”

Since applying to the program, Collins has been growing hemp for the past five years.

On top of needing a license to grow, Collins said growers also have to send GPS coordinates of their field and their storage facilities, then send that information to Kentucky State Police so they know all of the goings on on the farm.

Collins said there are different ways to grow hemp, from buying and setting plants to growing them from seeds. Collins grows the hemp from seeds.

“I have a modified corn planter that has different seed plates just for hemp. You can’t have any kind of chemicals on it at all, so the biggest problem for me and other growers I think is weeds. You got to get out with the hoe or the cultivator, it’s all manual labor. That’s the biggest obstacle so far.”

Collins said growing hemp is about as labor intensive as growing tobacco, but just a different process.

“You’ve got to top it just like tobacco, and then you cut it. Some people hang it in their barn like tobacco, I take it to a drier and have it dried that way, but still it is labor intensive.”

The crop will be taken from Collins farm and put into storage either in Lexington or Winchester, where it will then be processed. Several companies throughout the state and even internationally will then use the CBD oil extracted from the plants.

On top of raising hemp, Collins also sells CBD products to customers. What he finds surprising about his customer base is that there appears to be a popularity of CBD products among older patrons.

“It’s funny, because most of my customers are 60 years old and older, up to 80-85 years old. So that’s pretty neat that back a few years ago people that age it was nonsense to even talk about anything cannabis or anything, but now they’re realizing not everything they were told over the years wasn’t exactly true and it actually has a lot of benefits that big pharmacy doesn’t want to talk about.”

As far as the profitability of growing hemp, Collins said he has cleared between $1,700 and $1,800 an acre over the past couple of years. The crop itself is priced on the amount of CBD oil it produces after being processed, which is valued at around $7 per pound, although the market does fluctuate.

“You don’t know what you got until they do the processing part of it. That’s the trouble with it now too, it’s not like the cattle market or the tobacco market where you take your product then you come home with a check,” he said. “A lot of people are kind of leery about that because you do have to wait on your money, but it’s early in the industry and those bugs will be worked out.”

Compared to crops like tobacco, he said that is about just as profitable, maybe even slightly less so at times, than tobacco.

“The cattle market in the way that it is this day and time and corn and soy beans, I don’t think you’re going to get extra rich doing it, but it’s something to keep the farm going through the year,” he said.

In seeing the decline of tobacco and the seeming rise of hemp farming, Collins believes that hemp may be the crop to replace what was once a cash crop in Kentucky for generations.

“You hear on the radio and TV about companies like Pepsi Cola and Coca Cola wanting to come up with products to put in their drinks that has CBD in it, so I think that of those kind of companies like that catch on and have luck doing that, that’ll be a big help to the future of it and the market and I think it’ll drive the market up,” he said.

Top left: Joe Collins has been growing industrial hemp for five years. A migrant worker uses a hedge trimmer, right, to cut down the hemp while another woker, bottom, loads the plants onto a truck for transport. 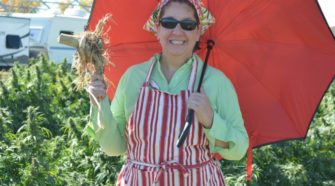