CLARK COUNTY, Wis. (WEAU) — More than a year after Wisconsin lifted a 60 year ban on hemp farming, one Clark County family is sharing how its investment in the controversial plant has helped grow a new business.

The owners of Cannabis Cultivators of Clark County say the hemp growing business is their livelihood. WEAU first covered his family back in 2018 when their business was just getting started. More than a year later, they say it’s been worth it.

Flo Degenhardt says her family started the business because the regular job market was not doing them any favors. “Health wise my husband had major back surgery which enabled him to not be able to drive truck anymore full time and I have my own batch of health issues,” she said.

When Wisconsin’s industrial hemp pilot program became available the Degenhardt family did some research and decided it would be a good industry to get into. They eventually started growing hemp before deciding to open a shop selling hemp-based products.

Flo says in this first year of business, getting rid of the stigma behind hemp products has been a tough obstacle to overcome. She says a big part of that has been the business’ name.“Cannabis Cultivators …we wanted to stick out but also make people aware of who we are and what we’re doing and so the stigma right off the bat is with our emblem …we have a cannabis leaf on there so people automatically assume that its marijuana,” said Flo.

Hemp is made from a certain strain of cannabis that contains only a small amount of THC, no more than 0.3 percent. “A big misconception is that it is marijuana and that it will have a psycho active effect. I have to explain to people that while it is Cannabis, it’s a cousin of marijuana. It’s not marijuana,” said Shopkeeper, Brandon Allen.

Allen says the store sees a pretty wide range of customers, from ages 18 to people in their 80’s. “A lot of our customers that come in they say that it helps them with anxiety, stress, sleep disorders, anything regarding inflammation, pain muscles, aches…,” said Allen.

When it comes to hemp, Flo hopes the public keeps an open mind. She says what sets cannabis cultivators apart from other shops is that they do everything themselves…the product is grown and processed locally. She says she’s looking forward to another successful year of business. 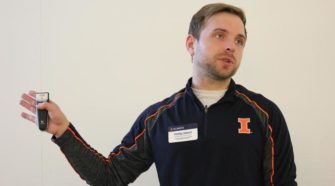