You can listen to this story below, and/or continue reading.

Cave City, Ky.–The Cave City Industrial Park will soon have a fully functional hemp processing plant that owners Bob and Jill Bryant say will be a much needed facility for a growing farm program.  The extraction facility will be known as “Best Buds Botanicals”.   With tobacco becoming less and less profitable for growers to harvest, many are turning to hemp.  With federal regulations lifted on hemp in a recent farm bill, a growing industry is now a booming industry.

“They’re so short-handed, there’s farmers waiting out there, before they can even do anything to get their product tested,” Bob said, “it’s a gold rush!”  Jill, added, “It’s a boom!”

Jill Bryant works in the Barren County School system.  Her husband Bob works in industrial maintenance as owner and operator of Oops Inc.  The Bryant’s, in an interview with WCLU News, explained how farmers who used to grow a few acres of tobacco now have another option.

“The people out here that used to be tobacco farmers, that were growing  an acre, three acres,  five acres,  these people needed a market,” says Bob.  He added, “It just shows that  Kentucky is finally getting on board and realizing that there is another avenue besides tobacco.”

Jill recalls her father telling stories of growing hemp for the war, but says, when she first began looking into starting this new business, she quickly found that more growers were getting into the hemp program but there were not many options for farmers to sell it close by.  Bob says that the same climatic conditions and soil composition factors that make Kentucky tobacco so sought after are also desirable conditions for a quality hemp harvest.

“That’s the thing about Kentucky,” Jill said.  Bob added, “Kentucky grows the best.  The best.  But, that’s also why everybody is coming from Colorado and other states that are wanting it, but they want it from here.”

The Bryant’s say they won’t have to comply with FDA regulations, but the hemp they process must be analyzed and contain no more than .3 percent THC levels.  While both hemp and marijuana are strains of cannabis, only the hemp plants are legal.  She says, if the hemp delivered to their processing plant is not certifiably under .3% THC, then it’s considered illegal and will be destroyed.

The Bryant’s say that because this is new in Kentucky, people are still confused about hemp and its relation to marijuana.  Hemp, Jill says, is “not anything that will get you high.”

“This is God’s plant,” she said.  “These are things that the good lord put on earth for us to use.  And, don’t get me wrong…I’m not saying anything about the pharmaceuticals at all, but if you can do something like this to make you feel better, shoot go for it,” said Bryant.

Bryant also added that this business venture is an opportunity for her sons to have a career they can come home to.  She said, “I want my boys home, and if this business works, they’ll come.  Connor’s already coming.”

As for the city of Cave City, the Bryant’s say they’ve been excellent to work with.   Bob credited their incentives package and says, “they’ve gone in and changed the by-laws to get us in there.  It’s an opportunity zone.” Jill added, “they have worked with us like crazy.”

Once operational, Best Buds Botanicals will be open all year long.  The Bryant’s say they expect to be busy on day one.  “100 acres will run us almost a year, Bob says.  Jill reiterated, “we’re looking at processing between 500 and 600 pounds of biomass, which is the ground up hemp, in an eight-hour shift.”

The company hopes to grow to two eight-hour shifts, and eventually around the clock processing at the Cave City Industrial Park location.  They hope to be open by the beginning of 2020.  The Bryants have two partners in the venture from Ashland, Ky. 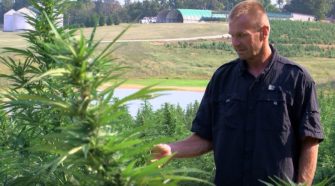