By JENNIFER HILL • Special to ALLOTSEGO.com

By JENNIFER HILL • Special to AllOTSEGO.com

The buzz from hemp is an economic one and Otsego County is starting to get it.

Last spring, the Canadian cannabis company, Canopy Growth, bought Stitzel’s Waterpoint Farm, which closed its dairy operations in 2017, and this fall will harvest its first hemp crop – 300 acres’ worth – in mid-October.

The hemp will be dried and milled at the farm, then sent off-site to be processed for its cannabinoid or CBD oil – the non-hallucinogenic chemical used for numerous medical conditions and ailments in mid-October.

With U.S. sales of CBD products projected to generate about $2 billion in sales by 2022, industrial hemp may play a role in reversing Otsego County’s economic decline.

“Hemp is a transformative crop for many reasons,” said Branson Skinner, Canopy Growth’s farm manager for New York State, who works out of Waterpoint. “It uses fewer resources than other crops, especially cotton, and you can get a greater biomass for paper than trees.”

According to Canopy Growth’s website, in 2014 it became the first cannabis company in North America to be publicly traded, and recently was listed on the New York Stock Exchange.

It provides a full range of cannabis products, from hemp and medical marijuana to “adult-use cannabis.” In New York, the state Legislature failed to legalize marijuana, but the Democratic leadership plans to try again in the next session.

Meanwhile, there’s hemp: a strain of cannabis with much lower concentrations of tetrahydrocannabinol (THC) – the chemical that gives users the high – 0.3 percent versus 2 to 19 percent in cannabis used for medical and recreational use.

Until Congress passed the Agriculture Improvement Act of 2018 last December, which legalized the growing of hemp nationwide, farmers could only grow hemp in states with pilot programs.

“The 2018 Farm Bill allowed money to be moved legally, for banks to accept money from hemp sales,” Skinner said. “And that opened up the whole industry.”

Hemp plants cannot have THC concentration above .3 percent and farmers must regularly test hemp to ensure the THC stays below that level, which can make growing the crop labor-intensive.

“If you have one plant that tests above .3 percent, you have to throw out the entire field of hemp,” said Janice Degni, Cornell Cooperative Extension field crop expert.

Skinner said they had not detected any THC in Waterpoint’s hemp when testing it. The hemp varieties used at the farm are “CBD-heavy” ones, and CBD neutralizes THC.

“You could smoke this whole field and not get high,” he asserted.

CBD hemp can be labor-intensive as well because CBD only occurs in the female plants’ flowers, so hemp growers have to check for male plants in the field and clear them out.

While Skinner attests no male plants have grown at Waterpoint, he spoke of another phenomenon they have to watch out for.

“Some female plants will become hermaphrodites by pollenating themselves if they ‘sense’ male plants aren’t around or they’ve been stressed by, say, too much water,” Skinner explained. “So, we have to look for and remove pollen sacs from them.”

Skinner said “part of Canopy Growth’s mission is to support small farmers and communities, to improve local economies, and really, to transform agriculture.”

That transformation has already begun at Waterpoint Farm, with the conversion of the farm’s dairy structures into ones that will be used for the hemp.

“Canopy Growth purchased Waterpoint not just because it had the good land for hemp, but it also had the housing, electrical infrastructure, buildings, diesel tanks,” Skinner said. “We weren’t just buying 1,200 acres of land.”

An old bunker silo is already being converted, and other buildings and silos will be repurposed in the next 2-3 years, for storing, drying and milling the hemp. The dried hemp is then sent to a processing plant for CBD extraction.

Waterpoint has also gone from having one employee to about 20 during the peak of cultivating the hemp over the summer. There are now six full-time employees and eight temporary/seasonal ones. With plans to double the production of hemp next summer – from 300 to 600 acres – the farm will be hiring more.

And Waterpoint could become an agricultural “hub” for the region and boost dairy farmers, Skinner said.

“We have a network of smaller farms near Plattsburgh who contract with us,” he explained. “We provide them technical support and a guaranteed market for hemp they grow on their farms. It could give dairy farmers a major shot in the arm.”

Such a farm network has not formed in Otsego County yet, but Skinner said after the October harvest, he will begin developing one. 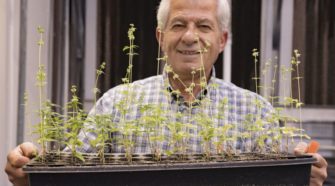