Science has a way, from time to time, of stepping outside the realm of the sane and possible and wallowing around inside dark territories that can only be called, as the kids might say, WTF moments.

Last year, it was head transplants pushing the limits of our medical potential, and now researchers say they have managed to create the cannabis compounds CBD and THC from the building block of bread and beer. Apparently, yeast is all we ever needed to produce the effects of marijuana. And if you just found yourself thinking holy cow, this is a brave new world, we are right there with you!

In a paper published earlier this year in the journal Nature, scientists explain the process in which they are using yeasts to manufacture cannabis compounds. These test tube shenanigans are being conducted more as a way for scientists to gain a better understanding of THC and CBD rather than a means for bypassing the cannabis plant in one’s quest for buzz or therapeutic benefits.

How does this work? It’s complicated, so try to keep up. Scientists essentially load hacked beer yeasts with the genes of a cannabis plant, which turn into CBGA, which then become either THCA or CBDA. Once these compounds are exposed to a heat source, they magically transform into THC and CBD.

Get it? Yeah, admittedly, the scientific mumble jumble behind this process sort of catapulted us back to the days when we were struggling to pass Chemistry class. It’s the reason we went on to become writers and not, well, mad scientists earning their livings morphing yeast in pot parts.

So, if all researchers are trying to do is study cannabinoids, why are they going through the trouble of creating THC and CBD from yeast when these chemicals are naturally available in the cannabis plant? Well, they say the creation of alternative cannabinoids is necessary because working with the plant itself is difficult. There is the growing process — and they don’t have time for that — and don’t get them started on the hassles involved with extracting the compounds from the plant. It is just easier and more efficient for them to create THC and CBD in a laboratory setting.

Another benefit to using yeast to produce cannabis compounds is it allows scientists more control. Extracting these chemicals from the flower creates a situation where it’s possible for CBD to be tainted with THC and vice versa. In order to properly study THC and CBD, researchers need to have flexibility. How else are researchers ever going to learn whether CBD is the all healing, rockstar compound that it has been made out to be?

“Being able to produce that [CBD] in a way that’s uncontaminated with THC is a pretty valuable thing,” UC Berkeley chemical engineer Jay Keasling, one of the study authors, told Wired.

However, comparing this process to head transplants is a bit of a stretch.

Researchers admit that what they are doing in the lab isn’t much different from what is actually happening with raw marijuana. Eating buds straight off a cannabis plant it isn’t going to do much more than leave a weird aftertaste in your mouth (don’t ask us how we know that). That’s because THC, the stoner component, isn’t generated until after the raw flower (containing mostly THCA) is exposed to heat. This is called decarboxylation. It’s interesting science, but nothing as fascinating as the Frankenstein madness of attaching heads to another body.

Researchers say the bioengineered cannabinoids they are creating from yeast are precisely the same as those found in cannabis. To that end, they believe the yeast technique could be the future of marijuana research. 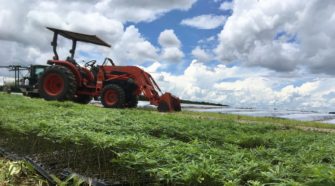