Hemp Hemp Hooray, a hemp boutique, opened its doors last week in the heart of downtown Columbia, in the space previously occupied by Swank at 917 E. Broadway.

Hemp Hemp Hooray offers a variety of CBD products, from candy and tea to lotion and bath bombs. One of their best sellers is the concentrated moisturizing cream containing 100 milligrams of CBD, which runs for about $30. In addition to CBD products, it also sells jewelry, clothing and kitchen accessories.

James and Jill Hartman and Kevin and Nicki Halderman are the owners of the Osage Beach-based hemp boutique. James Hartman believes its inclusivity is what makes Hemp Hemp Hooray stand out against surrounding CBD distributors.

“One thing we noticed when we first started looking into this business is that most CBD products sold in stores are sold in vape shops, which aren’t always the warmest and welcoming to a lot of people,” James Hartman said. “We wanted to go with a more upscale, boutique-type store where everyone, including older people, will feel comfortable going in.”

“The biggest thing that we wanted to do to separate ourselves from everyone is to be able to educate people about the products,” Hartman said. “People come in with different types of problems, from achy bones to anxiety, so we try to educate them on what product would benefit them best and what they can expect from it.”

Lions and tigers and roast beef — oh, my!

Lion’s Choice has grown its presence in Columbia by offering concessions at Mizzou Arena this season. The St. Louis-based restaurant chain also brings a food truck to Missouri football games.

It’s not stopping there.

In the future, roast beef sandwich lovers may be able to purchase the restaurant’s food outside of MU sporting events, since it is looking into opening a new bricks-and-mortar location in Columbia.

“We would love to re-enter Columbia with a traditional store format and are currently assessing various real estate options,” CEO and President Michael Kupstas said.

“With the success of the Lion’s Choice food truck inside of Faurot Field at Memorial Stadium, we hope to have an equally successful season at Mizzou Arena to build on,” he said.

It’s been over 10 years since the restaurant has had a location in Columbia.

For now, people can purchase “famous roast beef sandwiches as well as roast beef baskets with their crave-worthy fries” at Mizzou Arena, marketing coordinator Jessica Crouch said in an email.

The concessions “will also offer a King Turkey Sandwich à la carte for those wanting to shake things up a bit at Mizzou Arena,” Crouch said, along with a limited quantity of butcher block salads, cheddar cups and chocolate chip cookies.

For drinks, customers can buy a 16-ounce can of Bud Light and choose from soda and water options.

Lion’s Choice has Missouri roots. It was founded in 1967 and opened its first location in Ballwin. It currently has almost 30 locations in Missouri, along with western Illinois and Kansas City.

Silverball’s expanded space is open and functioning in full

The adjacent location to the north, at 120 S. Ninth St., which most recently housed Britches, is now connected to the existing bar at 122 S. Ninth St. and includes wall-to-wall booth seating, high-top tables, a full-service bar and TVs.

It’s what general manager Ryan McCann describes as a more “upscale environment” than the existing space in Columbia’s only arcade bar.

“We wanted to try and be as inclusive as possible with all of the age demographics as opposed to us being packed full of college students on a Friday or Saturday night,” McCann said. “We wanted to give young adults, as well as members of the community, a place to come and have a draft beer and watch a Chiefs game.”

In the works is a new food and drink menu, which will include high-end cocktails, appetizers and a “mastered pizza.”

“It’s not just going to be some generic pizza recipe that we’re throwing out there,” McCann said. “We’re going to try and find a pizza that can compete with the local pizzerias around us.”

Last month marked two years since Silverball owner Nic Parks opened Columbia’s only arcade bar. Parks is also the owner of The Pinball Company and Parks Amusements. Parks Amusements’ newest project, Level Up Entertainment, in the old MC Sports location in the Columbia Mall, is incorporating arcade games from the mall arcade and Lazer Lanes with much more.

Level Up also will feature a floor-to-ceiling ropes course, a laser tag arena and a full-service bar that includes Silverball’s frozen drinks.

“It’s super fun and active,” McCann said, “and it seems like it’s going to be a great place to kind of match everything good about Silverball.”

Level Up was scheduled to open its arcade and ropes course this past Friday, and all services are expected to be up and running Nov. 28.

Next Nov. 21 listening session to discuss industrial hemp - The Globe 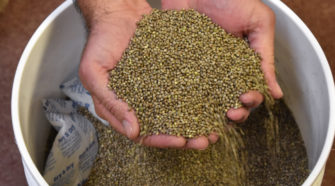