BRAWLEY — A Brawley-based business has been producing hand sanitizer to fill the local need of sanitizer due to the ongoing COVID-19 pandemic.

Since then, it has produced sanitizer for more than 85 businesses (including Imperial Do It Center and Cynthia’s Flowers), seven cities, four police departments, multiple fire and medical teams; farming organizations, banking entities and five trucking companies as far away as Las Vegas.

As of Thursday, the business has produced and bottled more than 76,000 ounces of hand sanitizer.

Badlands Provisions is owned by brothers John and Andrew Currier, of Brawley.

Badlands’ ability to produce the medical-grade sanitizer comes from its access to hemp.

In addition to growing, Badlands quickly became one of the first local businesses to offer harvesting, drying and shucking of the hemp crop.

This was a much needed and locally undeveloped post-process of the hemp crop for Valley growers, Badlands explained in a release.

Over the course of 2019 and into 2020, the Currier brothers continued to venture into new firsts with building (what will be) the first hemp processing facility in the Valley, Imperial CBD Extraction.

With the county’s support, the Curriers are hopeful for a spring 2020 opening of the facility.

As March approached and COVID-19 continued to unfold, the Curriers found themselves uniquely situated to help the community with what would be another first for them — hand sanitizer.

The extraction facility being built will extract CBD from hemp using a cryo-ethanol process.

After a team discussion, it was quickly realized that ethanol was also one of the main ingredients for the formula approved by the FDA and the World Health Organization to produce medical-grade hand sanitizer.

Badlands’ chief operating officer, Bari Smith, began research and procurement of the other needed items. Within 48 hours, the Curriers were in the (temporary) production of emergency hand sanitizer.

“Our hand sanitizer is different than what most are used to in many ways,” Smith said. “It is a liquid medical-grade sanitizer as opposed to a gel. It is 80 percent alcohol as opposed to 64 percent alcohol, and it’s more expensive. When we decided to produce hand sanitizer, we looked at all the possibilities to make it as cost effective for our community as possible. However, the reality is the Purells of the world do not produce hand sanitizer using ethanol that has a $26-per-gallon federal excise tax like ours does, nor do they battle the pandemic shortages of things like bottles, labels and even hydrogen peroxide, an ingredient used in making the sanitizer. We were faced with an uphill cost battle that we knew would be a deterrent to buying the product for some but we were determined to move forward with producing a product we knew could help many.”

“Since the sanitizer is a liquid, it is best applied by using a spray bottle,” Smith said. “It was important to our team that consumers would not have to buy multiple individual units and instead could buy a bottle of sanitizer solution to refill their individual spray bottles themselves.”

Smith said one of the biggest local needs has been in the ag community.

“We have especially worked with farmers to support their needs with the quickly approaching onion harvest,” Smith said.

The enormous demand for the company’s hand sanitizer has resulted in Badlands hiring seven new employees to help fulfill orders.

“We are so grateful to be in the position to hire even just a few new people during what is a very hard economic time for our community” said Smith. “There is nothing greater than community. As a team, we felt we had a real opportunity to help our local community by producing hand sanitizer that was so desperately in need by individuals and those on the front lines of the COVID-19 pandemic. Having direct connections to the ethanol world through our upcoming extraction facility put our organization in a unique position to be able to secure the ethanol needed to produce the FDA approved hand sanitizer and ultimately help fill a big need in the Imperial Valley and beyond.”

While Badlands is not selling single units directly to the public, single units as well as refill bottles can be purchased directly from Imperial Do It Center Stores (Brawley, Holtville, El Centro), LaBrucherie Irrigation Supply, as well as received as an add-on item when ordering flowers from Cynthia’s Flowers. 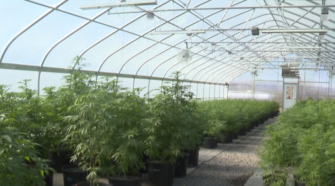