BOULDER — High prices, enthusiastic support from local government and business groups, and looser regulations in the wake of the 2018 Farm Bill passage led to the planting of tens of thousands of new acres of hemp over the last few years. In 2019, it became clear that the result of the additional product resulted in a production oversupply still being felt by the industry today, according to the 2020 Hemp Crop Survey from The Jacobsen Publishing Co., a Boulder-based commodity-pricing reporting agency.

“Pricing for hemp and derivatives was artificially high prior to the passage of the 2018 Farm Bill and remained so through planting last year,” the survey noted. “… The frenzied pace [of new hemp planting] was driven by public agencies and hemp advocates alike, with very few voices of reason warning about the basic principles of supply and demand. These voices were generally not welcomed at national conferences, it seemed as if hemp could not lose. In July, the perception of oversupply, along with extraordinary inventories of derivatives, caused pricing to plummet.”

Prices dropped from roughly $40 per pound last summer to around $10.

Last year, Colorado had 20,899 planted acres of hemp, according to the survey, which cites data from the U.S. Department of Agriculture’s Farm Service Agency. That’s good for second-highest in the country behind Montana, which had nearly 45,000 planted acres.

Jacobsen’s current estimate for planted hemp acreage in 2020 is projected to be 157,082.

Of that total, 79.4% of acreage is dedicated to growing hemp used in CBD products. The remaining acreage is used for fiber, grain or other non-CBD cannabinoids such as CBG.

Yields for farms that grow hemp averaged about 1,500 pounds per acre.  “We know that 3,000 lbs. per acre is achievable. but few are hitting that mark,” Jaobsen senior hemp industry analyst Chase Hubbard said.

The current oversupply means that there is a “significant volume of biomass that’s still in storage,” which could help keep prices down as older hemp is less valuable than a freshly harvested crop, he said.

Lack of storage infrastructure has resulted in about half of last year’s crop going unharvested in certain hemp-producing regions, he said.

“I think there is some optimism for pricing to grow, but the historical pricing we saw [in the immediate passage of the 2018 Farm Bill] is not something we’re likely to see again,” Hubbard said. 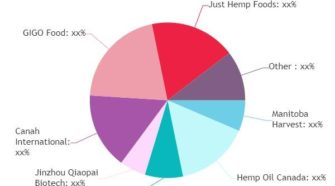