Pride and Produce, the sold-out book about the fertile Black Dirt farming region of Orange County, is about to be reprinted. The third edition, with updates that include news about the growth of CBD-Hemp, will be available in digital versions just before Christmas.

The new edition has two new sections. One covers some of the changes in the Black Dirt valley since the book first came out late in 2016, including efforts to curb flooding, and the growth of agritourism in this rare fertile farmland. The second new section covers the rapid growth of hemp farming for cannabidiol (CBD) – a wellness medication – throughout the Black Dirt farmlands. At least 20 farmers put a total of about 700 acres under hemp this 2019 season.

The book is written by Cheetah Haysom, an award-winning journalist who lived in the Black Dirt Region for 25 years and was for two years the President of the Pine Island Chamber of Commerce in the heart of the Black Dirt.

A reprint of Pride & Produce by Cheetah Haysom will be available digitally just before Christmas. Photo provided 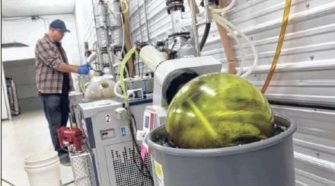