Bexar County’s crime lab may soon become the first in Texas accredited to test the difference between hemp and marijuana — months after a new state law legalizing hemp inadvertently made it difficult to press charges in some marijuana cases.

The Bexar County Criminal Investigation Laboratory, which conducts forensic testing for many local law enforcement agencies, has submitted its new procedures to the American National Standards Institute, the agency that oversees national accreditation for forensic testing.

“The goal is to be the first in Texas to go online,” said Brian Cho, a forensic scientist who helped develop the new procedures. “An individual has been assigned to go over our documentation to verify our procedures and our data.”

The need for new equipment comes after Gov. Greg Abbott signed legislation last year that made industrial hemp legal and ushered in a new definition of what’s pot and what’s hemp, both of which come from the same plant.

But to tell the two apart, district attorneys need to rely on more technically advanced testing equipment that they say wasn’t readily available until now.

In July, Bexar County District Attorney Joe Gonzales announced that his office wouldn’t press charges for possession of small amounts of marijuana — at least not until the testing problem was solved. Four other Texas prosecutors, including Kim Ogg in Harris County, announced similar plans.

He said felony marijuana charges, which includes possession of more than 4 ounces of marijuana, would be considered on a case-by-case basis.

Since June 10, marijuana has been defined as having more than 0.3 percent THC, the psychoactive ingredient that gives users a high. It remains illegal. Anything under that amount is considered hemp and now is legal.

The distinction follows a definition adopted by the federal government in the 2018 U.S. farm bill, which legalized hemp at the federal level and sparked interest from state lawmakers who wanted to do the same in Texas.

The new law is good news for the hemp industry and aspiring farmers who want to cash in, but it failed to anticipate the problem of crime labs — including at the Texas Department of Public Safety — lacking the pricey equipment needed to determine THC levels.

In the past, to tell whether a sample had any THC, labs have done quick chemical tests for cannabinoids and looked for characteristic hairs that should be present on any pot plant. That only took a few minutes, experts say.

But with the hemp law, labs now have to extract THC from the sample and determine the exact amount present in the substance, which requires new testing procedures that have to be approved by the accreditation agency.

In September, Bexar Commissioners Court approved about $100,000 to purchase the new equipment. The county bypassed typical bidding procedures to expedite the purchase, citing the need to protect public health. Otherwise, it could have taken another several months to get the funding approved.

DPS also has been testing new procedures. The agency plans to roll out its long-awaited method in the next month or so, according to the Texas Tribune.

Cho, who helped test the new procedures in Bexar County, said he began researching new methods over a year ago in anticipation that the law might change. With nearly 38 years of experience, Cho has established testing protocols for several new drugs over the years, including synthetic marijuana.

He said establishing the new tests was tricky. Traditionally, in order to determine the concentration of a substance, scientists used a machine that would expose the drugs to a high level of heat. But that couldn’t work with THCA, the raw, non-psychoactive cannabinoid found in hemp, because THCA converts to THC when it’s dried and heated.

Cho researched the different types of machines available. He decided Bexar County should invest in a machine that could be set at a certain temperature, meaning the THCA would not convert.

Cho said the new mechanisms work with a very low margin of error. The equipment will be able to test all forms of marijuana, including oils, waxes and edibles. It can also test methamphetamine, cocaine and other drugs.

If the new procedures are approved, the Bexar County District Attorney’s Office has indicated it will focus on prosecuting the backlog of felony marijuana cases that have piled up since the new law went into effect.

The office also could prosecute misdemeanors in those rare instances where the cases don’t qualify for cite-and-release. His office does not prosecute any possession cases that involve less than 1 ounce.

Under cite-and-release, law officers have the discretion to either arrest or simply cite — give a ticket to — the individual if he or she is caught with less than 4 ounces of marijuana and no other serious crime has been committed. That program is expected to continue, even with the new equipment.

But Orin Dym, the laboratory director who oversees the crime lab, pointed out it’s often necessary to test small amounts of marijuana when person with the drug is involved in a more serious crime.

For example: A police officer could suspect someone of possessing a small amount of marijuana and in the course of that investigation, determine that a burglary occurred. To pursue the more serious charge, prosecutors need to prove that the officer had probable cause to begin the investigation, so the lab has to show that the original substance was illegal marijuana.

Bexar County Judge Nelson Wolff, who toured the crime lab Tuesday morning, said he was impressed by the new testing and excited for Bexar County to be among the first labs in the state to be accredited in the new procedures.

“We take pride at being first,” he said with a chuckle.

Emilie Eaton is a criminal justice reporter in the San Antonio and Bexar County area. Read her on our free site, mySA.com, and on our subscriber site, ExpressNews.com. | eeaton@express-news.net | Twitter: @emilieeaton

Do hemp seeds live up to the superfood hype? – The Spokesman-Review 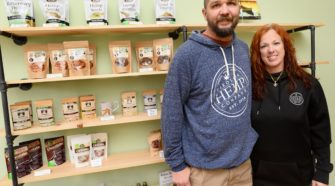