Bees love hemp. The taller the plant, the greater the number of bees that flock to it, so says a new study.

Most of us learn in high school biology class about the mutual friendship bees maintain with flowers. However, you might be surprised to learn that bees have developed a similar relationship with hemp. In fact, the bigger the hemp plant, the more bees that flock to it.

Hemp production has spread across the country following its legalization by the 2018 Farm Bill, which is why scientists at Cornell University wanted to better understand the agricultural and environmental impact such aggressive hemp production could have. Up until this recent study, the exact nature of a bee’s relationship with hemp flowers has remained unclear.

The study, published in the Environmental Entomology journal, determined a strong correlation between higher hemp plant heights and the abundance, as well as the diversity of bees visiting them. Plants at least two meters tall attracted nearly 17 times the number of bees as their shorter counterparts. In the northeastern United States alone, hemp could support 16 different varieties of bee species, which the agricultural community should remember moving forward.

“As cultivation of hemp increases, growers, land managers, and policy makers should consider its value in supporting bee communities and take its attractiveness to bees into account when developing pest management strategies,” state the study’s authors.

Photo by Damien TUPINIER via Unsplash

Researchers made repeated sweep collections of 11 different farms in New York state. Among the most commonly captured were mellifera (60%), more commonly known as the European honey bee, and impatiens (30%), common eastern bumblebees. The study emphasized that hemp could provide essential nutrient resources for bees at times of floral scarcity, particularly in late summer when many bee-pollinated plants perish.

If you were worried about consuming cannabinoid-rich pollen, and whether bees would suddenly start crafting THC-abundant honey, the study’s authors assure you not to worry.

They found the presence of cannabinoids, particularly tetrahydrocannabinol (THC), in hemp pollen is “not likely to have an impact on bee development due to the loss of cannabinoid receptors in insects.”

© 2019 Benzinga.com. Benzinga does not provide investment advice. All rights reserved.

Next Banking Rights in the Hemp Industry: We Need “SAFE” Banking - Ministry of Hemp 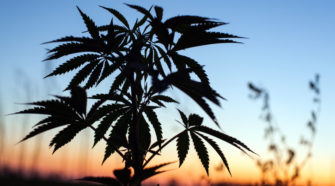