Eight decades after the anti-pot propaganda film “Reefer Madness” stirred a moral panic over marijuana, cops and prosecutors in North Carolina are bending the truth to bind hemp to its infamous cannabis cousin.

Law enforcement groups are lobbying the N.C. House to ban the sale and possession of smokable hemp effective June 1.

“Since smokable hemp and marijuana are indistinguishable by appearance and odor, without enactment of legislation clearly banning smokable hemp, we will have de facto legalization of marijuana,” states a position paper distributed by the North Carolina Sheriffs’ Association, N.C. Association of Chiefs of Police, N.C. Conference of District Attorneys and State Bureau of Investigation.

That headline-ready hyperbole is false. President Donald Trump signed the farm bill declaring hemp a legitimate agricultural commodity in December 2018 and the sky hasn’t fallen in the year since. If there’s amnesty in the war on drugs, someone forgot to tell the front-line troops who continue to arrest and prosecute marijuana users every day.

People smoke hemp and use hemp products for the compound CBD, which is proven to alleviate seizures and is being researched as a possible treatment for anxiety, depression and chronic pain. CBD is safe and non-psychoactive.

Hemp contains infinitesimal amounts of the marijuana chemical THC. Users will never get high, but if lawmakers kowtow to the cops, those hapless patients will be treated like Cheech and Chong.

It’s true that police field tests can’t tell the difference between hemp and marijuana because the plants are almost identical. But roadside tests are notoriously unreliable — estimates peg the rate of false positives between 21% and 33% for some test kits, which is why they’re inadmissible in court. Innocent people have been jailed when tests mistook cat litter and doughnut glaze for meth and cheese and tortilla dough for cocaine.

Law enforcement groups fear people caught with marijuana will claim they’re carrying legal hemp and officers won’t be able to prove otherwise. But police can still seize the suspicious substance and send it off for laboratory testing, which would be required to take a pot possession case to trial anyway. If results reveal marijuana, officers could obtain arrest warrants. Where’s the downside in demanding better than slipshod science before breaking out the handcuffs?

Lobbyists want to ban hemp flowers and plant material that could be mistaken for marijuana, but would leave CBD-infused products like tinctures, salves and edibles alone. Smokable hemp accounts for roughly a fifth to a quarter of all CBD products sold in North Carolina, and patients choose to smoke it because inhalation is a quicker route to the bloodstream.

“It’s another delivery method of CBD,” said Blake Butler, executive director of the North Carolina Industrial Hemp Association. “In what we see from listening to our retailers, it’s folks with Crohn’s disease, folks with anxiety. The consumers don’t want to get high. It’s a valuable part of some of these farmers’ and growers’ revenue that we don’t want to take away.”

Hemp growers aren’t trying to make marijuana legal. They’ve embraced regulation and oversight at every turn and have tried mightily to work with law enforcement to differentiate their product from pot.

Butler said his trade group has recommended an open container law that would keep smokable hemp legal but prevent it from being used in motor vehicles and in public places. Farmers also suggest compliant packaging legislation that would require hemp flowers to be sold in sealed containers marked with QR codes that verify the crop’s origin.

“We’re trying to help them in any way possible to say that this is hemp,” Butler explains. “We do everything we can to work with law enforcement. We respect their opinion. I want to be a top state. I don’t want to give up and ban something. I want to help law enforcement by giving them the technology and the tools.”

A compromise like the N.C. Industrial Hemp Association proposes would eliminate the potential for marijuana users to pass themselves off as hemp consumers. Cannabis flowers would be OK in bags signed and sealed by state-licensed hemp growers and otherwise presumed unlawful. That ought to win over even the most ardent pot prohibitionists.

State lawmakers should listen to North Carolina farmers. They’re bending over backward to accommodate police and prosecutors. Don’t slash their earning potential in a knee-jerk response to faulty forensic tests whose error-ridden reputation precedes them. 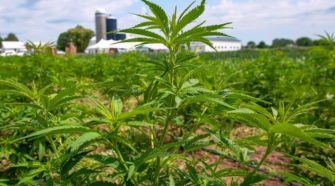