Lacking access to the banking system has been a big problem for the cannabis industry. Since marijuana is illegal at the federal level, many banks have shunned businesses that sell pot, making it difficult for those sellers to hold bank accounts. Some banks have provided services to cannabis companies but it’s still a very gray area in terms of law enforcement.

The Obama administration issued the Cole Memorandum, which meant the federal government would not interfere with states that legalized pot. However, when Attorney General Jeff Sessions rescinded the memo in January 2018, it added uncertainty back into the industry. Although there have been no consequences thus far for banks doing business with cannabis companies, those that do walk a very fine line and have to ensure they follow tight reporting requirements. Many banks simply don’t work with cannabis companies to avoid the chance of running afoul of federal laws. For many cannabis businesses, that means having to hold a lot of cash and hiring security guards to protect the money.

However, companies that sell hemp, which is now legal at the federal level, don’t face those same challenges.

Lawmakers passed the farm bill a year ago, which opened significant doors for the cannabis industry. It permitted the sale of hemp-derived cannabidiol (CBD) products at the federal level. Hemp-based CBD products are characterized by very low tetrahydrocannabinol (THC) levels, containing no more than 0.3% of the psychoactive substance. However, it’s still up to individual states to set up their own regulatory programs governing hemp, which the vast majority have done thus far.

But despite hemp businesses having a stronger legal footing than companies that sell marijuana, there hasn’t been formal recognition that they are safer for the banking industry — until recently.

On Dec. 3, the Federal Reserve, along with other federal agencies, issued a joint press release confirming that hemp-related businesses do not have to follow the same tight banking rules that marijuana businesses do.

Because hemp is no longer a Schedule I controlled substance under the Controlled Substances Act, banks are not required to file a Suspicious Activity Report (SAR) on customers solely because they are engaged in the growth or cultivation of hemp in accordance with applicable laws and regulations.

Although the release appears to give its blessing for banks to do business with hemp companies, federal regulators are reminding banks that they still need to do their own due diligence: “When deciding to serve hemp-related businesses, banks must comply with applicable regulatory requirements for customer identification, suspicious activity reporting, currency transaction reporting, and risk-based customer due diligence, including the collection of beneficial ownership information for legal entity customers.”

For marijuana businesses, the previous guidance still remains intact, which states, “Because federal law prohibits the distribution and sale of marijuana, financial transactions involving a marijuana-related business would generally involve funds derived from illegal activity. Therefore, a financial institution is required to file a SAR on activity involving a marijuana-related business (including those duly licensed under state law).”

Why this matters to investors

Many banks across the country offer banking services to marijuana businesses. While banks can technically offer their services to cannabis companies and it is permitted by the Department of Treasury, the reporting requirements and necessary due diligence can make it more of a hassle than it’s worth. The federal government can also choose to be tougher on enforcement with the Cole Memo rescinded.

Even though cannabis companies are able to secure banking services, that doesn’t mean the relationships are long-term. In many cases, banks change their minds and decide to no longer offer their services to the industry, leaving cannabis companies back at square one. The added scrutiny of the SARs represents a heightened level of risk that many financial institutions, particularly larger ones, would rather avoid. The federal government effectively giving banks the green light to operate with hemp-based businesses without having to worry about SARs removes many concerns for financial institutions and lessens the risk of their running afoul of federal regulators.

Consider a company like Charlotte’s Web (OTC:CWBHF), which has dominated the hemp industry with more than 9,000 locations across the country. The updated guidance gives it yet another advantage over companies that sell pot. Not only will Charlotte’s Web have access to more financial institutions, but it will also have access to a broader range of financial products as a result. That means securing loans — and obtaining more favorable interest rates in the process — will also be easier with the big banks, since the banks’ risk of doing business with hemp is lower than with a marijuana business.

Marijuana businesses still have to wait on federal legislation to pass, such as the SAFE Banking Act, in order to receive the same type of guidance as hemp businesses are able to benefit from today. Marijuana companies can still obtain banking services, but it’s a lot more challenging without clear support and guidance from the federal government. Until that or similar legislation passes, marijuana companies will continue to face obstacles when trying to find access to banking. While companies don’t typically report security-related expenses individually, having less red tape in the industry will lessen the overhead and administrative costs that come along with finding and maintaining banking services — assuming they’re even accessible. And any advantage that allows a business to keep its costs down will give it better odds of breaking even, which is something that the cannabis industry has struggled with thus far.

Charlotte’s Web is a safe bet

In three of the past four quarters, Charlotte’s Web recorded a profit, something that likely wouldn’t have been possible if it sold recreational marijuana and were unable to ship its products across state lines and reach as many customers. Access to banking is just one way in which cannabis businesses that sell hemp-based products are safer investments than marijuana producers are and why a company like Charlotte’s Web is a much safer investment in the industry than other cannabis stocks.

Next Riggleman suggests improvements to benefit hemp farmers in letter to Sec. of Agriculture - WSET 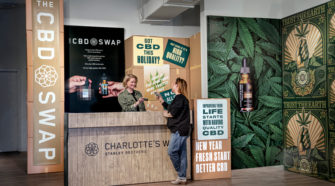