PLATTSMOUTH — Inside a climate-controlled greenhouse screened off by trees from U.S. Highway 75 grows a crop that some say could become a savior for Nebraska farmers.

The nearly 284 hemp plants — affectionately called “my girls” by grower Annette Wiles because they’re all female plants — are part of a modest pilot project authorized by the state this year to see if the pungent, stalky plant that looks and smells like marijuana can become a viable commercial crop.

Wiles and her husband, Bruce, said that three months’ experience with their “girls” has taught them that the plants can be temperamental.

“It’s actually quite challenging to grow,” said Bruce Wiles, a former traditional farmer who operates the state’s largest hops farm with his wife just outside of Plattsmouth.

The Wiles farm was among 10 scattered across the state that were selected, via a lottery, to try growing hemp, a crop that was plentiful in Nebraska decades ago. The towering stands of “ditch weed” that populate the state’s roadside ditches and stream banks are remnants of that.

But it appears, as the first harvest approaches, that growers and regulators still have a lot of learn about this budding crop.

The 10 selected hemp farmers didn’t get to plant a crop until late June — long after the normal planting time — resulting in stunted plants. Some blamed the delay on the state, which they maintain has been dragging its feet in allowing hemp cultivation. Then there was the cool, rainy weather to contend with, as well as unexpected pests.

And the Wileses — who defend the state’s slow approach — said hemp growing isn’t a simple matter.

For instance they just recently repotted their 2-foot-high plants — four varieties specially bred in Colorado for maximum production of CBD oil — after discovering that their hemp plants didn’t grow well in the thick compost they use for hops. Now, they’re applying artificial light 24 hours a day in hopes of harvesting their first crop in January.

Still, the Wileses say that for the right growers, hemp, just like hops, has a bright future in Nebraska.

“If people don’t get on board now, they’re going to miss out,” Annette Wiles said, mentioning a recent meeting they attended in Iowa of prospective hemp growers that drew 800 farmers, who paid $200 each to learn about the industry.

Annette Wiles is already a user of a cream infused with the hemp byproduct CBD (or cannabidiol) that she swears is reducing back pain. And just like brewers like to use hops grown locally, she thinks consumers will embrace “local” hemp for things like creams, flavoring for beer and even as an alternative to tobacco.

“There’s so many great effects and products that we can get from hemp production,” Bruce Wiles said.

By law, hemp must have less than 0.3% THC (the high-inducing chemical in marijuana) to be legal. Anything above that is still an illegal drug. That has caused confusion among prosecutors and law enforcement officers about discerning between legal hemp and illegal pot. The Wileses, to make sure they’re growing legal hemp, purchased a boombox-sized machine to test the THC content.

Nationwide, hemp growing is expanding rapidly. Vote Hemp, a national organization that advocates for hemp farming, estimated that about 233,000 acres of hemp was planted this year, about three times what was cultivated in 2018. Forty-six states have legalized cultivation of hemp, with at least 34 states licensing growers to produce hemp for clothing, paper, oil and medicinal purposes.

Some advocates criticize Nebraska for allowing only 10 growers this year, out of 176 who applied, and think that the state is falling behind on a tremendous opportunity.

“It’s not a miracle crop,” said Andrew Bish, whose company in Giltner produces hemp-harvesting equipment. “But the reality is that Nebraska farmers need some economic relief and need some options, and this is a real viable option.”

Bish said his company has sold hemp equipment in 30 states, but he joked that all of his spending on hotel bills is not in Nebraska, but in states like Kansas, Oregon and Colorado, that have been more aggressive in approving hemp cultivation.

He said he has added four new employees to keep up with demand and expects his sales of hemp harvesting machines to double in 2020. But Bish said he’s also heard companies say they’re hesitant to locate hemp-processing plants in Nebraska because progress has been so slow in allowing research and planting.

“In Nebraska, there’s so much uncertainty,” he said. “That’s a big signal to investors to stay away.”

State Agriculture Director Steve Wellman pushed back on the criticism.

He said states typically begin slowly with hemp cultivation. And he maintained that there’s still too much uncertainty about hemp growing, processing and marketing to jump all in.

“It’s still a young business. It’s not a commodity yet. The market demand is still hard to measure,” Wellman said. “There’s still a lot to learn.”

Nationally, there have been stories about farmers getting bad seed that includes unwanted male seed. Because there are no federally approved pesticides, crops must be weeded by hand, making it much more labor-intensive. And Wellman said he’s heard of producers growing a crop without first lining up a buyer and being stuck with their hemp. Some unscrupulous buyers have backed out of contracts, he said.

With seed costing between $1,000 to $2,500 per acre, Annette Wiles said it’s important to know you’re dealing with reputable producers.

One irritant to hemp advocates is that Nebraska, unlike some other states, hasn’t yet submitted its hemp regulations to the U.S. Department of Agriculture for approval. The USDA can take up to 60 days to approve state plans, which raises concerns that growers in Nebraska will again get a late start planting crops in 2020.

“It’s just amazing how slow the bureaucracy can be,” said Bill Achord of the Nebraska Hemp Association.

That, Wellman said, may present “a timing issue” again in 2020. He added that it was too soon to speculate about whether Nebraska would allow unlimited hemp licenses next year or a limited number, as in 2019.

As far as the potential of hemp in the state, he said that Nebraska has proved to have ideal growing conditions but that growing it for fiber and seed appears to provide the most promise. Growing hemp for CBD, Wellman said, would be much more expensive because it would require costly greenhouses to avoid cross-pollination with low-CBD wild hemp.

Bish, the equipment maker, said his experiment this year with growing “heirloom” hemp from seed gathered near his farm didn’t go well. Wet weather meant he couldn’t plant till late June, and his crop was stunted. Still, he said, hemp grows well in Nebraska and can produce four times the profit of corn. It would be a good crop to rotate with corn and beans.

Achord, the hemp association president, said the state needs to attract a company to process the hemp into fiber, thus reducing transportation costs for producers. But overall, he said hemp could provide a profitable alternative for farmers, who are struggling to make money on the traditional crops of corn and beans.

“Within five years, we’ll be raising a lot of hemp,” Achord said.

We’re always interested in hearing about news in our community. Let us know what’s going on! 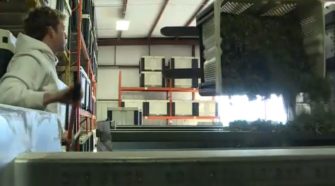