A Gold Rush mentality has erupted across Chesapeake Bay states as the lacy fan-shaped leaves of more than 50,000 acres of industrial hemp spring from the landscape for the first time since World War II.

Bay states and the federal government are removing barriers to growing the misunderstood plant, which was a staple crop from Colonial times and then banned for little more than its likeness to a mind-altering cousin, marijuana.

Now, hemp is again being embraced amid bold claims that include a possible economic life preserver for struggling farmers and an environmentally friendly cash crop that could help reduce nutrient pollution in the Bay. Nearly 2,800 farmers and entrepreneurs had hemp in the ground this summer in Virginia, Pennsylvania, Maryland, West Virginia and New York.

Hemp backers are convinced that the plant is a sustainable alternative to plastics, cotton and fossil fuels, touting the possibility of more than 25,000 natural products that range from plant-based concrete and pain-salving lotions to animal feed and biofuel.

But much is still unknown about hemp’s future economic and environmental impact. In the Bay watershed, scientific research is under way to determine if high-quality hemp can even be grown in the region’s climate and soils and to learn whether it is indeed a miracle plant that offers all of the Earth-friendly benefits and human health claims promoted by supporters.

Advocates say that the plant stores more carbon than it needs to grow, which makes it a possible tool for fighting climate change. Early research also suggests the plant is better than mainstream crops in sucking up phosphorus from manure and poultry litter spread on fields before it can wash off and pollute local waterways.

Hemp grows fast, tall and thick, outcompeting weeds and reducing the need for herbicides, proponents boast. In Pennsylvania, it is being planted on abandoned strip mines to see if it can take root in the depleted soil. Minnesota has a state-run pilot project studying hemp as a mass-produced alternative to corn and soybeans to improve water quality.

Because it grows fast and profuse with a robust root system, hemp may make an excellent streamside buffer to stabilize banks and catch manure and soil runoff, some have claimed.

But some studying hemp aren’t seeing it as an environmental panacea for the Bay states.

Ryan Davis of the Alliance for the Chesapeake Bay said that the group took a look at hemp for riparian buffers but rejected it because hemp is a seasonal crop and dies back in winter. Also, a monoculture of one plant is not good for an ecosystem, he said.

“I have concerns about the crop itself. The mid-Atlantic is a tough place [to grow hemp] because of the weather and climate. We have a lot of humidity and warm evenings that promote disease,” said Andrew Ristvey, an Extension specialist for commercial horticulture with the University of Maryland.

Ristvey added that he is encouraged by research showing that hemp grown for fiber may remove phosphorus, a type of nutrient, from the soil. But whether hemp proves to be a better plant for the environment in Bay states will depend on the amount of fertilizer and chemicals needed to grow quality plants. For now, those are unanswered questions.

And, because hemp grows around the same time as mainstream crops such as corn and soybeans, it cannot be used as a winter cover crop to help reduce nutrient runoff.

As for needing fewer pesticides, Eric Williams, a spokeswoman for the Virginia Department of Agriculture and Consumer Services, noted that when hemp is grown for its flowers and CBD oil, which constitutes the great majority of plantings so far, plants are spaced farther apart and weed growth can be a problem.

Samuel Fisher, a Plain Sect farmer in Chester County, PA, who is growing hemp for its flowers as a source of CBD oil, said his experience so far shows that the crop needs plenty of nutrients from fertilizer. Insects have not proven a problem but threats of fungus and bacteria have been.

“For dairy farmers who are struggling, it could either keep them in business or put them out of business very quickly,” Fisher said. “You can’t just plant it in a field and pretend it’s going to grow and come out two months later to harvest it. We have two to three people in the field every day.”

“I think we’re going to quickly learn that it’s like a lot of crops we deal with. Insect and disease pressure will be prevalent,” added Lancaster County hemp farmer, Christopher Harnish, who is growing a little more than 3 acres in a field used last year for corn.

Dr. John Fike, a Virginia Tech associate professor of crop and soil environmental sciences who has researched the plant, said there are a number of “hemp mythologies.”

He said claims of reduced pests and less fertilizer needed are simply not true.

Referring to studies on growing hemp on compromised land to clean up the soil, such as polluted industrial sites and strip mines, he said, “You can grow it on marginal land but you get a marginal crop.”

He said hemp can be grown with no-till farming methods but that herbicides are needed to control weeds.

Some have expressed concerns that if hemp becomes a profitable cash crop that farmers and landowners will pull out of government conservation programs that set aside farmland for streamside buffers and instead plow the land for hemp.

But officials in Bay states say that is not happening, at least not so far. Most hemp is being grown in former tobacco and alfalfa fields and other areas already in production.

“No one is clearcutting wooded acres for hemp,” said Shannon Powers, spokeswoman for the Pennsylvania Department of Agriculture.

The hemp boom comes at the same time that the region’s dairy and tobacco farmers are reeling from low prices, tariffs and falling demand. Though they are a savvy and conservative bunch, some can’t help but hope that the arrival of hemp is a fortuitous blessing.

“I’ve had more than one dairy farmer say ‘I’m going to grow this stuff to try to save my dairy operation,’ ” Fike said.

But it’s too early to predict how much of a lifeline hemp might be for farmers.

Markets and processing facilities for most of hemp’s projected uses, especially the line of products derived from fiber and seeds, have not emerged on a wide scale yet. Research is still taking place to determine which varieties can be grown in Bay states and how successfully.

And everyone is still waiting to see how the federal government will regulate hemp, now that it is no longer considered a dangerous, controlled substance. To date, the federal Food and Drug Administration hasn’t approved the use of any pesticides to treat hemp or decided which CBD health claims can be verified. And while the 2018 federal Farm Bill made hemp eligible for crop insurance, the guidelines have yet to be put in place.

Skittish ag-lending banks are not yet handing out loans for harvesting and processing equipment.

Most of the growers in the Bay states are experimenting with hemp on only a few acres. When and if hemp takes off, will farmers in the region be able to compete with 500-acre spreads in the Pacific Northwest where the industry has a head start by years?

“There’s just an awful lot of unknowns,” Fike stressed. “Will this be a flash in the pan or the next big thing or just another crop? That remains to be seen.”

Even hemp cheerleader Erica Stark, chair of the National Hemp Association, advised caution, though she sees hemp’s future footprint as huge. “Certainly, we love the enthusiasm out there and we want to get everybody excited, but we also need to be realistic. It’s not going to happen overnight.”

Ristvey offers his own prediction. “It won’t be a magic bullet. I suspect it will be just one of those crops that will add to the palette of agriculture that we have in the United States.”

847 growers, 161 processors, 36 dealers
8,500 acres of hemp cultivation permitted
2019 is the first year Maryland has allowed cultivating hemp for commercial use.
Many growers are struggling tobacco farmers.

955 growers, 191 processors, 55 dealers
10,000 acres of hemp cultivation permitted
The cultivation of hemp for commercial use was approved in March 2019.
The biggest concentration of growers are tobacco farmers hit hard by declining sales and tariffs imposed by China.

158 growers
2,531 acres of hemp cultivation permitted
Hemp licenses tripled in 2019, the second year hemp was allowed to be grown commercially.

Advocates of hemp say there are more than 25,000 possible uses of industrial hemp beyond the current considerable and growing CBD oil market. Here are some most likely to see a market.

Hemp CBD oil can be used to treat a variety of ills including anxiety, inflammation, chronic joint pain, epilepsy, headaches and sleep disorders.
Hemp seeds and oils can be used for cooking oil, baking flour, yogurt, beer, snacks and high-protein animal feed for pets and livestock.
Hemp fiber is similar to but lighter than plastics for packaging. The automobile industry is exploring products such as dashboards, door panels and mirror frames to reduce plastics and install a lighter material that could improve gas mileage.
Hemp fiber can be used for clothing, animal bedding, kitty litter and to absorb oil.
Hemp fiber is used as a core for insulation, paneling and home building blocks. It is being sold as Hempcrete.
Fast-growing and tall hemp can be planted in streamside buffers.
Hemp is touted as a biofuel.
Heating hemp plants produces a soil amendment known as biochar that absorbs water and stores greenhouse gases. 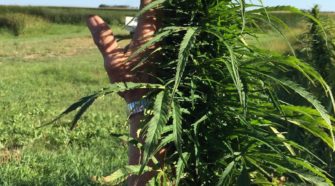