Experts: Education is key to preparing for producer questions

AMARILLO – Amid a growing number of questions flooding into Texas A&M AgriLife Extension Service offices, a group of agency personnel recently traveled to Oklahoma and southeastern Colorado on an educational hemp tour.

Danny Nusser, AgriLife Extension regional program leader for agriculture in the North Region serving Amarillo and Lubbock, coordinated the tour to help agents gain a comprehensive understanding of hemp production and to be better equipped to answer producer questions as there has been no industrial hemp grown commercially in Texas since the 1930s.

“We felt this agent professional development tour was important for two reasons: to address the lack of research-based, factual information available, and particularly in our area, the need to have a basic understanding of the production issues and challenges of growing industrial hemp,” Nusser said.

Industrial hemp production in Texas was approved by House Bill 1325 and signed into law by the Governor, but still requires the establishment of licenses, fees, criminal offenses and civil and administrative penalties.

The U.S. Department of Agriculture is finalizing federal regulations and guidelines. Once they are established, the Texas Department of Agriculture will submit state regulations and guidelines for approval by the USDA. When all is approved, potential growers will have to complete the licensing process, which will include background checks and require third-party crop testing to validate THC levels.

Hemp refers to the plant Cannabis sativa L., including the seeds and all derivatives, extracts, cannabinoids, isomers, acids, salts and salts of isomers with a delta-9 tetrahydrocannabinol, THC, concentration of not more than 0.3 percent on a dry-weight basis. Cannabidiol, or CBD, is the most referenced product aligned with hemp production, but non-consumable hemp products include cloth, cordage, fiber, fuel, paint, paper, particleboard and plastics.

Several meetings have taken place throughout Texas recently, Nusser said, but much of the information has been from the sales side of the industry and not the production side. To better understand production issues, the tour included visits to two different farming operations in the Rocky Ford, Colorado, area as well as a visit to Oklahoma Panhandle State University, where a hemp research program is being started.

The trip allowed the participants to discuss agronomic issues with the farmers such as water use, pest management, disease pressure, planting and harvesting considerations, markets, labor, regulations and much more, Nusser said.

The perspective gained from the producers, he said, was there are a large number of potential markets that could be developed in the future, but at the same time an extreme amount of risk is involved.

“What we learned is the risk assumed by these experienced producers we met in Colorado is incredible,” Nusser said. “I left with a feeling that there could be opportunity for producers growing hemp, but not without careful consideration of all the risks. We need to ensure accuracy of information and validate sources for answers and markets.”

Trostle said in one interview he was asked, “Is Texas A&M AgriLife ‘dubious’ about hemp production for CBD?”

He said he suggested he was more “cautious” prior to the Colorado tour, but, “I am dubious about the CBD side of hemp because of excessive production costs and the frequent and ongoing reports of how much revenue or profit can be made, which we believe is simply not sustainable moving forward.”

One producer on the tour talked about how the price for CBD paid to producers has been dropping this year.

“With this information, we are expressing caution about the notion that CBD may prove a viable production opportunity for Texas growers, but I am separating out the hype vs. the realistic opportunity,” Trostle said.Trostle, along with Curtis Bensch, Ph.D., an Oklahoma Panhandle State University professor who is researching hemp and who spoke to the tour group first, visited an additional Colorado hemp farm with 3,200 acres primarily for CBD and grain harvest for the planting seed market.

“Their acres were in good shape, including dryland. This farm offered a sharp contrast – not contradiction – to the production we observed near Rocky Ford, which was highly labor intensive and focused on producing hemp with a high CBD concentration,” he said.

The higher CBD concentrations are achieved in part by excluding any male plants from the field. However, the Springfield, Colorado, area farmer was growing for CBD in a different manner. They planted conventional grain seed at a fraction of the cost, and about 50% of the plants were male.

The top portion of the hemp plant is where the CBD oil is produced. (Texas A&M AgriLife photo by Kay Ledbetter)

“This grower knows this will significantly reduce CBD yield, maybe even as much as half, but he said their approach is economical and could still provide a massive source of hemp-derived CBD at potentially much lower cost,” Trostle said.

However, Trostle said, the grower indicated he believed the CBD hype will subside and he will eventually be a hemp fiber farmer, though there is currently no hemp fiber processing plant in Colorado.

Nusser said all the information received from hemp growers, seed producers and processing facilities on the tour will provide a foundation for the future for answering questions, making decisions and addressing challenges as this potential crop becomes a reality in Texas.

“AgriLife Extension agents and specialists strive to provide producers with information that is research-based and unbiased,” he said. “That’s who we are and what we do.

“Initially our goal will be to dispel myths and provide facts to producers and the public, and eventually to develop resources to help producers make decisions regarding production and marketing of hemp in our area. This trip helped build a foundation towards those goals.”

Previous CSU economist: Hemp has potential but many hurdles, too - Journal Advocate

Weed's wild ride: The highs and lows of a 'naturally' volatile market 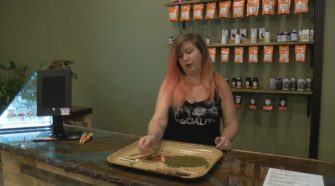 ‘We’re not being given the proper direction’: CBD store employees want answers after AG opinion – WIS10