Hemp farms are cropping up in Morgan County, and local business owners want to get in on the new industry. This past week, two dozen farmers, bankers and other agriculture professionals gathered in Brush to learn about the future of hemp production in the state.

The East Colorado Small Business Development Center hosted two “Harnessing Hemp” events in the area this past week, first in Brush on Dec. 12 and then in Sterling on Dec. 17. The seminars gave hemp industry newcomers a crash course on production, and more experienced farmers a look at how the industry and the law regulating it will change during the next few years.

The hemp industry has grown dramatically since 2018, and the SBDC has simultaneously expanded its efforts in hemp programming. The group sold out its first hemp seminar this past February in Greeley, which was capped at 30 attendees and had a waiting list of 40 people. East Colorado SBDC Director Lisa Hudson said that since then, the SBDC has made more connections with local farmers, lawyers and advocates.

“It’s really helping our local farmers learn more about it,” Hudson said. “This territory is so agriculture based, when the farm bill passed last year I was thinking, ‘Let’s learn more about this so we can educate.’”

The federal government passed its most recent “farm bill” in 2018, which established an interim system for regulating a domestic hemp production program. This interim system went into effect this past October and will run through Nov. 1, 2021, when a final version of the regulatory program becomes law. The federal government is accepting public comments on the interim hemp production rule until Dec. 30, 2019.

David Bush, a Denver-based attorney practicing cannabis law, spoke to the crowd in Morgan County about what hemp production might look like in the next few years as the interim federal system works itself out. He said federal policy before the 2018 farm bill acted as a criminal regulatory system meant to control the hemp industry’s growth, and that the new law will potentially allow for widespread production.

“We wanted to have very tight control and a criminal model of control. That is what we had for decades and decades, then we had states start coming in and liberalizing their laws,” he said.

Hemp has been legal to grow in states like Colorado for years, and people like Bethleen McCall have come to the forefront of the local industry. McCall is the vice president of the Colorado Hemp Industries Association and has helped operate a hemp flower farm in state since 2016.

“Just seeing what’s happened here in Colorado, my estimate is that actual harvested (hemp) is somewhere around 200,000 acres for this year,” McCall said.

Orchard-based hemp farmers Kate and Brett Cary started growing hemp this year, and they attended the SBDC seminar in Brush to learn more.

“Because we’ve dealt so much in the farming side, it was good to hear the legal side and the business side of it,” Kate Cary said after the Brush event.

Kate said they got their 150-acre hemp production going this past May and are still deciding whether or not to continue growing the crop in 2020.

Seth Albert and his partners also started farming hemp in Morgan County this year, and they were looking for insight into how best to begin selling their product and potentially expanding their operation.

Albert lives in Brush and said that before he began experimenting with hemp production, he’d grown alfalfa for more than six years in town. He and his partners now farm 20 acres of hemp, hoping to eventually sell it for processing into CBD products.

About half of the people at last week’s seminar were new to hemp farming within the past two years. Hudson said she was glad to meet new local producers and is looking forward to the industry’s growth in Northeast Colorado.

“There were lots of new faces in the room, and we had a good mix of people here,” Hudson said after the Brush seminar. “Today we had a really good mix of growers and industry people.

The SBDC will host a longer, two-day “Harnessing Hemp” program called “Cultivating a Business” on Jan. 17-18 in Fort Lupton and on March 6-7 in Greeley. Hudson said that seminar will be more intense and will feature 24 speakers from across the industry. Registration is open now. 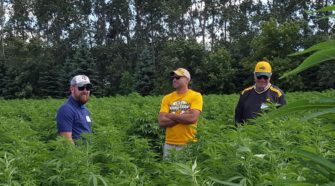