As Alex White Plume gathered his children and grandchildren along the bank of Wounded Knee Creek to harvest hemp in September, he was one of just a handful of farmers in South Dakota with hopes of making money from the crop this year.

Gov. Kristi Noem has blocked industrial hemp from being grown in the state, but that’s not stopping tribes who can regulate their own hemp crops under the 2018 Farm Bill. Many tribes are drawn to hemp’s potential for bringing profits to communities that badly need it. They say that Noem’s resistance is giving them an advantage to getting into the market, even as it may complicate their ability to transport and sell it.

White Plume first tried to grow hemp on Pine Ridge Indian Reservation when the Oglala Sioux Tribe passed an ordinance allowing industrial hemp in 1998. His efforts put him at odds with the federal government, including Drug Enforcement Administration agents who came to his land in 2000 armed with guns and weed trimmers to destroy his crops.

“I give thanks to Noem,” he said. “It gives me a chance and my family a chance to get ahead.”

The 2018 Farm Bill cleared the way for states and tribes to grow hemp by submitting their plans to the Department of Agriculture. Earlier that year, White Plume decided it was time to harvest hemp again, relying on the argument that he was on tribal land made sovereign by treaties with the U.S. government.

Others are making sure the federal government approves of their hemp plans before putting seeds in the ground. The Flandreau Santee Sioux Tribe and White Plume’s Oglala Sioux Tribe have filed applications with USDA to grow hemp. The Rosebud Sioux Tribe is holding a hemp vote before applying.

Tribes across several states have formed the Tribal Hemp Working Group to share information on drafting codes, gaining approval from the USDA, and using the best seeds and techniques.

They are also coordinating to make sure the new crop does not cause members to run afoul of the law. Rosebud Sioux Tribal President Rodney Bordeaux said he was concerned tribal members could get into trouble transporting hemp on South Dakota’s highways.

South Dakota charged a Colorado man with drug trafficking after he was pulled over with 300 pounds (136 kilograms) of cannabis that he was delivering to the Minnesota Hemp Association. He said the plants were hemp, but a lab test found levels of THC — the compound in marijuana that produces a high — above the legal limit of 0.3 percent.

Noem has argued that it would cost hundreds of thousands of dollars for the state’s law enforcement to test cannabis for THC levels.

Bordeaux said in a statement that he was concerned the hemp drivers may be arrested or have their crops confiscated if the state’s law enforcement could not “field test the hemp to make sure that it is what we say it is.”

Noem has indicated that South Dakota will comply with federal laws in allowing hemp to be transported across the state.

Tribal representatives said they would be working with the state to make sure their hemp plans don’t run into trouble. Chase Iron Eyes, spokesman for Oglala Sioux President Julian Bear Runner, called the state “a necessary partner” and said that the tribes and South Dakota have the potential to lead the nation in hemp production if they worked together.

Tribes also face another set of bureaucratic hurdles. Tribes and individuals must apply with the Bureau of Indian Affairs to change the use of tribal lands that are held “in trust” by the federal government. While the policy is designed to make sure land stays in tribal possession, it has also held them back from developing agriculture, said Terry Anderson, who studies the economics of Native American reservations at the Hoover Institution, a conservative think tank.

Tribes that grow hemp also face competition from large agriculture companies, including tobacco companies, said Heather Dawn Thompson, a lawyer who is advising the Tribal Hemp Working Group. But she said tribes are ready to commit to hemp for the long term, and believe the hemp textile market will continue to develop and expand.

As hemp re-enters use after nearly 80 years of being outlawed in the United States, people are just beginning to discover how it can be processed and turned into products like construction material, clothing, and dietary supplements. Janie Simms Hipp, president of the Native American Agriculture Fund, said that gives Native Americans an opportunity that has been rare in modern agriculture — to have a place at the starting line with everyone else.

Still, Hipp said her organization is focusing on hemp research to make sure it doesn’t make critical mistakes in the early going.

“Opportunities can turn sour in a heartbeat,” she said. “Everyone needs to calm down and do their homework.” 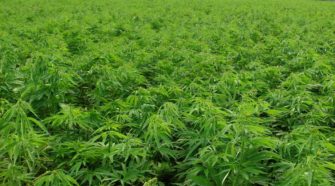