In a field behind his house, Bill Hendley of Marion inspects the hemp plants growing in the hot sun. When they are ready for harvesting, he will take them inside his house and begin the process of making CBD oil.

When the plants are brought inside, Hendley first has to place them in a sun room where they can dry out. After they are dried sufficiently, he grinds them up and starts working to extract the oil.

It is another step in this careful and laborious process for McDowell County’s first certified hemp farmer. Hendley said he’s been a beekeeper and produced honey for at least 25 years, off and on. He and his bees still produce honey but lately he’s focused on combining the cannabidiol (CBD) from his hemp plants with the honey from his bees. The honey also masks the bitter taste of the oil.

What he is doing only became legal in North Carolina last year. For decades, the federal government considered hemp to be an illegal substance but that is changing.

Industrial hemp (scientific name Cannabis sativa) has been used for centuries as a source of fiber and oilseed. It has been used all over the world to make a variety of industrial and consumer products. Currently, more than 30 nations grow industrial hemp as an agricultural commodity, which is sold on the world market. In the United States, however, production is strictly controlled under law, according to the Web site for the N.C. Department of Agriculture.

The 115th Congress made additional changes to policies in the United States regarding industrial hemp production through the Agriculture Improvement Act of 2018. The U.S. Department of Agriculture has begun the process to gather information for rulemaking. Until further notice, North Carolina will continue to operate under the Industrial Hemp Pilot Program authorized in 2014, according to the state Department of Agriculture’s Web site.

Hemp production is legal in North Carolina, but only as part of the state’s pilot program as allowed under federal law. The N.C. General Assembly passed Senate Bill 313 in 2015, allowing the Industrial Hemp Commission to develop the rules and licensing structure necessary to stay within federal laws. The state law was modified in 2016 in another N.C. House bill. The Industrial Hemp Commission adopted temporary rules for review in February 2017; these were approved by the Rules Review Commission of the Office of Administrative Hearings, according to the state Web site.

“As soon as the law changed, hemp stores started appearing in towns in North Carolina,” said Hendley. “The largest majority were from out of state and were not buying local products.”

Hendley became interested in growing industrial hemp after his son Billy brought him a pack of honey straws infused with the oil that came from California. That got him to thinking about the possibilities of making a similar product here in McDowell County.

Hendley inquired at the local office of the N.C. Cooperative Extension Service where Extension Director Molly Sandfoss gave him the information he needed to get a license as a hemp farmer. N.C. State University helps promote this program, he said.

This wasn’t the first time he had received help from the local Cooperative Extension service. Through the local agency, he got a grant in 2014 to help him expand the number of hives for his honeybees.

Hendley received his license to be a hemp farmer from the N.C. Department of Agriculture a year ago in September 2018. The first thing he did after that was purchase 20 cannabis plants for $200.

“They have to be bought from a certified seller,” he said.

Hendley also spoke to his pastor and the McDowell County Sheriff’s Office about what he was planning to do. He realizes many people associate industrial hemp with marijuana since they are both part of the cannabis family of plants and he didn’t want people to get the wrong idea.

“There’s people who have preconceived ideas about it,” he said.

You can’t get high from using his hemp. The plants that are grown by Hendley contain less than .3% of tetrahydrocannabinol (THC), the natural compound in cannabis. Marijuana plants contain higher concentrations of THC, which can give you the high.

Hendley had to learn how to grow hemp and then make clones of it. The reason he had to make clones is because only the female plants make CBD oil with less than .3% THC, he added.

“You can’t get a high or a buzz off any plant authorized in North Carolina,” said Hendley to The McDowell News. “So if anyone raids my field, they’re in for a big disappointment.”

But hemp can be used for other purposes such as fiber, paper, clothing and CBD oil. The hemp industry in North Carolina is looking for it to become a $6 billion industry in five years, said Hendley.

CBD oil has been studied for its use in a variety of health issues. It is believed to help people with anxiety, pain, side effects of chemotherapy, diabetes, sleep disorders and acne. For acne, it can be taken internally or externally as a salve. For knee joints, some people take the salve and rub it on their joints. It also has been known to slow the progression of Alzheimer’s disease, Hendley said, but these claims lack scientific backing.

He said customers should be aware that the suspected health benefits of CBD oil are still being evaluated scientifically.

“I’m not allowed by the FDA to make any outlandish claims,” he said.

He added you would have to take a straw every day to get the health benefits and he doesn’t do that.

Before he can harvest anything, the state has to come and check if the THC in his plants is above the .3% level. If it is, his crop is destroyed.

Once it passes that test, he can start the painstaking process of combining the CBD oil with the honey. The honey masks the taste of the CBD a little.

You can buy his straws with CBD oil and honey at the Historic Marion Tailgate Market every Tuesday or at Trinity Hemp in Black Mountain. You can also find his products at the farmer’s market in Forest City.

Hendley became the first certified hemp farmer in the county but he added are about nine or 10 others now. He also has a partner in this effort. Hendley and Chris Allison bought 1,500 plants and they are in a field near Old Fort, addition to the plants at Hendley’s house.

Adam Lawing is the extension agent over agriculture and natural resources with the McDowell County center. He said the N.C. Hemp Commission is the state body in charge of this program.

Lawing said hemp is a very new crop for not only McDowell County and North Carolina but for the United States too. He added there are a lot of unknowns when looking at growing/harvesting techniques as well as pest prevention and treatment.

“All of that information will be found out in time after more and more research is done,” he said to The McDowell News. “I think that it is always important to keep searching for more new forms of agriculture whether that be alternative/specialty crops or new uses of commodities.”

“There is no one right way to farm, it is all about what works best for each farmer,” Lawing added. “With that being said, I think hemp does have a potential in McDowell County. I have worked with a few growers this year, and their crops for the part look really good. Hemp is a crop that is very labor intensive and an expensive crop to start. I think that is one of the most ‘turn offs’ for farmers looking in to growing hemp.”

Hendley, who is retired, knew what he was getting into when he started hemp farming. But he was willing to try something new for him and McDowell County.

“It’s always good to be on the cutting edge of something new,” he said to The McDowell News. “And at my age, why not?”

Clearing the Smoke: The Science-backed Health Benefits of Cannabis 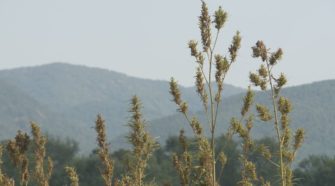