Hemp is something one is seeing increasingly everywhere in new products to market since it was legalized for commercial use not too long ago by the federal government. It was thus inevitable that some distilleries would begin exploring ways to try and add it to the mash bill of whiskeys some how, and now one of the first out of the gate in this regard seems to be Sono 1420, a Connecticut based distillery created by the former CEO of CuraLeaf and COO of Curio Wellness.

The new hemp seed based whiskey like spirits (labeled officially as “Spirit Distilled from Grains and Hemp Seed and Finished in Oak Barrels” because of the hemp seed presence) from Sono 1420, according to those behind them, do not constitute the majority of the mash bill for the two expressions currently bottled.

As those at the distillery explain it, “by experimenting with this nutritious grain in our recipes, we have developed bourbon and rye mash bills that perfectly balance traditional whiskey grains like corn, rye, wheat and barley with hemp seed to create delicious, ‘hemped’ whiskeys unlike any spirits in the market.”

Keeping this in mind, here is information on the two releases Sono 1420 recently unveiled that were “distilled from grains and hemp seed and finished in oak barrels:”

1420 BBN – Most people would call this Bourbon but the federal government won’t let us because it contains hemp seed.  Our mash bill, like many whiskeys, is comprised of 75% corn, 15% rye, and 10% milled hemp seed.  The nose on this spirit is unexpected, considering the mash bill – light and floral, suggestive of honeysuckle with hints of dried fruit, particularly cherries. On the palate, all the vanilla, cinnamon, and honey expected of a bourbon whiskey are present but, instead of trailing off into the usual extended, syrupy butterscotch-caramel finish, the journey continues down towards some interesting, nutty-flavor characteristics – another contribution of the ground hemp seed.1420 Hemped Rye Whisky – Made from 75% rye, 15% corn, and 10% milled hemp seed, this spirit exhibits pepper on the nose, with a faint and elusive honey undertone.  On the palate, the characteristic bite of rye has been softened to a nibble, allowing flavors of pepper and cinnamon-honey to spring forth pursued by marzipan and dried fruits in the finish.  For all its intrigue, this is a rye-drinker’s rye – a day-in/day-out, easy sipping whiskey.

No pricing information was immediately available for these releases, which are limited to just Connecticut distribution right now, and, as far as the name of the distillery goes, it is a nod to the state Senate’s 14-to-20 vote against alcohol prohibition in 1919.

As an aside, it will be interesting to see how products like this gain traction in a generally already very crowded whiskey marketplace. Will consumers try them for the “wow” factor as there is hemp in there? Will there be a rush of these types of bottlings, or will this be something that is more of a very niche product? Time will tell. 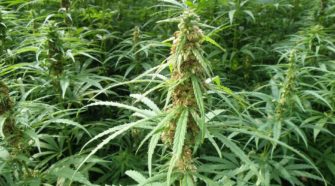