Cannabidiol, or CBD as it’s more commonly known, has emerged in recent years as a popular natural treatment for a variety of ailments. It is one of the many compounds that makes up cannabis, or marijuana, but doesn’t produce the same psychoactive effects that cannabis is known for.

CBD doesn’t have the intoxicating effects of THC, and can provide certain people with a number of benefits. Here are four of the most surprising benefits of consuming CBD.

A large portion of the population deals with acne at some point or another. Most of the time it’s a genetic condition passed down from your parents, but it can also be the result of a number of factors, including hormone imbalances, exposure to harmful bacteria, and certain medications. It can be a painful condition that results in unsightly pus-filled pimples.

You can try to treat acne using skincare products like Proactiv’s acne treatment system. However, some studies have suggested that CBD can also play a role in treating acne.

CBD is known to have anti-inflammatory properties and, when consumed, can affect the cells responsible for producing sebum, one of your body’s natural oils produced by the sebaceous glands.

One of the causes of acne is an overproduction of sebum, which mixes with dead skin cells and clogs up your hair follicles. By reducing the amount of sebum produced, CBD can balance out your body’s natural oil production and prevent clogged follicles, thereby alleviating the symptoms of acne.

In some cases, CBD can be an effective treatment for chronic pain and inflammation. This could be partly due to the fact that one of the systems in our body that plays a role in regulating pain response is known as the endocannabinoid system, which produces endocannabinoids, or neurotransmitters that bind to cannabinoid receptors in your body’s nervous system.

Consuming CBD-infused products, made by companies such as CBDfx, can help relieve the symptoms of those suffering from chronic pain and inflammation by interacting with these endocannabinoid neurotransmitters and altering their activity.

A number of studies have supported the claim that CBD has natural pain-relieving effects, specifically in cases where a patient has multiple sclerosis (MS) or arthritis.

In fact, an oral spray containing both THC and CBD called Sativex has secured regulatory approval in multiple European countries to treat pain caused by certain conditions. Several studies have shown that Sativex offers promising results when it comes to pain relief for patients suffering from MS and arthritis.

More than 100 million people, or nearly half of all adults in the United States, deal with high blood pressure. High blood pressure can increase the stress put on your heart and blood vessels and lead to serious medical problems, such heart attacks, strokes, and heart failure. However, some research has shown that CBD may be an effective natural treatment for high blood pressure.

In a study published by the American Society for Clinical Investigation, researchers gave nine healthy male volunteers a 600 mg dose of CBD or placebo in a randomized double-blind study.

Therefore, it’s reasonable to think that CBD may provide your heart and your circulatory system with important benefits, similar to how sterol supplements by iHerb promote cardiovascular health.

Many adults suffer from anxiety and depression, mental disorders that can be devastating and seriously affect one’s quality of life in some cases. When it comes to treating these disorders, CBD may be a safe and natural option for certain people.

By interacting with the receptors in the brain that produce serotonin, a naturally produced chemical known to contribute to one’s well-being and happiness, CBD can help regulate mood and act as an alternative to traditional pharmaceutical drugs, some of which have harmful side effects.

In studies regarding anxiety and depression conducted on both humans and animals, CBD showed promising results. In one particular study, researchers gave a dose of CBD to volunteers suffering from social anxiety and had them undertake a public speaking test. They found that a 300 mg dose of CBD proved effective in reducing anxiety levels in the volunteers during the public speaking activity.

More and more research is being done about the effects of CBD as it gains popularity among people. So we soon may know even more about the unique benefits that CBD can provide. Thus far, though, it appears to be a very promising natural treatment, with a bright future ahead of it.

Get Real-Time Updates from MJobserver.com

Previous CBD and THC – What are they and how do they affect your health? 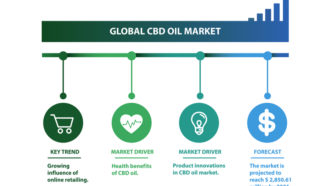