Unilever PLC (NYSE:UN) is undoubtedly one of the largest CPG companies in the world, with over €50 billion in 2018 revenues and literally hundreds of brands in its portfolio.

From household food and beverage brands like Breyers ice cream and Lipton teas to widely used personal care brands like Axe fragrances and Dove soaps., a scroll through Unilever’s 400+ brands can make it seem like the multinational consumer packaged goods conglomerate owns absolutely everything.

How Unilever Stays On Top

To stay ahead of the pack in a competitive CPG landscape, Unilever invests roughly €1 billion each year to research and development initiatives. This drives product innovation and keeps the company’s brands on the cutting edge of technologies and trends.

With the legalization of hemp and its derivatives, thanks to the 2018 Farm Bill, one of the newest breakouts onto the CPG scene in 2019 was CBD. While this non-psychoactive cannabinoid is finding its way into everything from toothpicks to suppositories, the beauty, grooming and skincare side of the CPG world has to be one of the most logical applications of the plant’s natural benefits.

In fact, Jefferies analysts estimate that the CBD beauty segment specifically could reach $25 billion USD globally in the next ten years and will capture 15% of the entire skincare market.

Beyond the personal care market, one of the most logical opportunities for CBD infusion is the beverages, foods, and snacks space. As the FDA lays out guidance for interstate commerce in CBD-infused food and beverages, this will surely be another multi-billion dollar market.

With a €1 billion R&D budget and over 400 brands in its arsenal, Unilever is advantageously positioned to formulate, market, and distribute CBD-infused products at a moment’s notice. The only things holding the company back from doing so are regulations and reputations.

In chronological order of expected roll-out date, the two Unilever brands that are expected to offer hemp and CBD line extensions are:

In September, Unilever subsidiary brand Schmidt’s Naturals will be launching “a line of hemp-oil deodorants” through select retailers. While these products will be infused with hemp seed oil, not hemp-derived CBD, Michael Cammarata, Chief Executive Officer at Schmidt’s Naturals, says that the hemp oil deodorants line will be followed by a CBD product range as long as the regulations are cleared up by the FDA.

Acquired by Unilever in 2017, Schmidt’s Naturals’ offerings since its inception in 2010 always included natural deodorants that leveraged plant and mineral-derived formulas rather than aluminum-based antiperspirants and heavy fragrances.

In addition to its focus on natural ingredients, one of the reasons that Unilever selected Schmidt’s Naturals as a logical first step into the hemp and CBD space was the fact that the brand is less than ten years old and is expected to have a growing millennial consumer base thanks to its recently announced strategic partnership with Justin Bieber.

Whereas other Unilever brands like Dove or Axe could have easily housed hemp-infused extensions to their antiperspirants and deodorants lines, Dove traces its history back to the 1950s and Axe is not exactly known for including the most natural ingredients.

Perhaps more or less surprising than Schmidt’s Naturals, Ben & Jerry’s, which was founded in Vermont back in 1978, just recently announced that it also wants in on the booming hemp and CBD space.

As a company made famous for flavors like Half Baked and Magic Brownies, it’s no surprise that Ben & Jerry’s is attracted to the newest trend in food infusions – CBD.

Ben & Jerry’s intends to make its CBD-infused ice cream available once CBD is legalized at the federal level. Currently, the FDA prohibits adding CBD to food and beverages for interstate commerce. Ben & Jerry’s submitted a public comment on the issue alongside the administration’s hearing on May 31st regarding the legalization of CBD in food and beverages and will launch its products as soon as regulations allow.

Acquired by Unilever in 2000, it comes as no surprise that Ben & Jerry’s will be one of the first brands in the company’s vast portfolio to unveil a CBD-infused line extension. “We’re doing this for our fans,” said Ben & Jerry’s CEO Matthew McCarthy. “We’ve listened and brought them everything from Non-Dairy indulgences to on-the-go portions with our Pint Slices…we want to give them what they’re looking for in a fun, Ben & Jerry’s way.”

With these two brands already planning to harness the power of hemp and CBD for upcoming product lines, Unilever is finally and officially dipping two of its 400+ toes into the cannabis space. Beyond just launching line extensions, it goes without saying that Unilever is active when it comes to M&A, and will not hesitate to buy out a brand that it sees as competition to its empire.

In the meantime, be sure to subscribe to updates here so you never miss an important development. 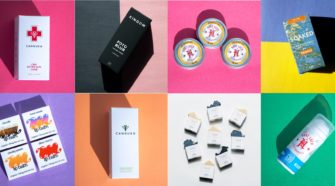