Marijuana may not be federally legal in the U.S., but that doesn’t mean the market for cannabidiol (CBD) isn’t about to heat up. Although CBD will have to be derived from hemp, as that was what U.S. legislators allowed in December 2018 when they passed the farm bill, there’s still a lot of interest in hemp CBD products. And for a couple of Canadian companies looking for more growth, producing hemp-based CBD products is an attractive way to get in on the hemp and cannabis craze in the U.S. Below are two stocks that could become forces in the industry in 2020:

Canopy Growth (NYSE:CGC) may not be a big player in the U.S. hemp market today, but that could change quickly. The cannabis giant already has a license in New York to grow hemp and has a 308,000 square-foot facility in Kirkwood that the company expects to be operational in 2020. The company has not provided a firm launch date, but in April it did state that it plans to “recruit the full workforce in mid 2020.”

However, the company isn’t waiting for its cultivation facility to be up and running before it starts tapping into the hemp market. In December, Canopy Growth launched First & Free, a product line for hemp-based CBD products that customers can buy online. The site currently offers shipping to dozens of states. And since hemp products are legal federally, they wouldn’t need to be sourced locally, as Canopy Growth would be able to ship them from Canada into the U.S. From a logistical standpoint, that helps the company be more efficient in its operations and keeps its costs down.

One of the big advantages that Canopy Growth will have long term in the hemp CBD space is that it’s partnered with Martha Stewart to develop products. At a time when consumers may be hesitant to buy hemp or cannabis products, knowing that a well-known celebrity like Martha Stewart is involved could go a long way in giving Canopy Growth an advantage over its competition.

Tilray (NASDAQ:TLRY) is another Canadian-based company that’s looking to generate sales in the hemp-CBD market south of its border. It may not have the star power of a Martha Stewart in the fold, but the company has a different advantage. In February 2019, Tilray announced that it closed its acquisition of Manitoba Harvest, which was a cash-and-stock deal worth 419 million Canadian dollars (approximately $322.7 million U.S. dollars).

It’s an important move for Tilray, as Manitoba Harvest already has a wide range of hemp products in its portfolio, and they’re already sold in both Canada and the U.S. In addition to its popular Hemp Hearts brand of products, Manitoba Harvest also sells hemp oil and protein.

Tilray is already a significant hemp producer as a result of the acquisition; its most recent quarterly earnings showed hemp sales contributing $15.7 million over the past three months, slightly less than the company brought in from adult-use marijuana sales in Canada, which totaled $15.8 million.

Getting involved with Manitoba Harvest allows Tilray to accelerate its growth in not just the hemp CBD market in the U.S., but around the world. As of December 2019, hemp CBD products are sold in over 20 countries and are in 16,000 retailers in Canada and the U.S.

Tilray and Canopy Growth are two of the bigger names in the cannabis industry and, with both of them setting their sights on hemp-based CBD products, could make a big dent in the U.S. market very soon. Charlotte’s Web is one of the more notable companies in the hemp CBD space today, and last quarter its sales totaled $25 million, which doesn’t put it that much further ahead of Tilray.

With Tilray having Manitoba Harvest and Canopy Growth benefiting from Martha Stewart helping it develop hemp products, both companies could give Charlotte’s Web a run for its money, as both have some significant advantages. Since Canadian companies can’t sell nonhemp (e.g. marijuana) products in the U.S., focusing on hemp is the next best thing — and that’s why both companies have been making big moves to try to establish strong positions in that segment of the industry.

This year could prove to be a pivotal one in determining who the real market leader will be in hemp products now that competition is intensifying. 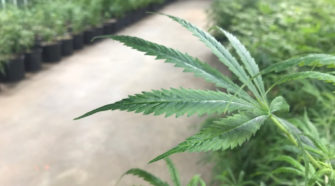